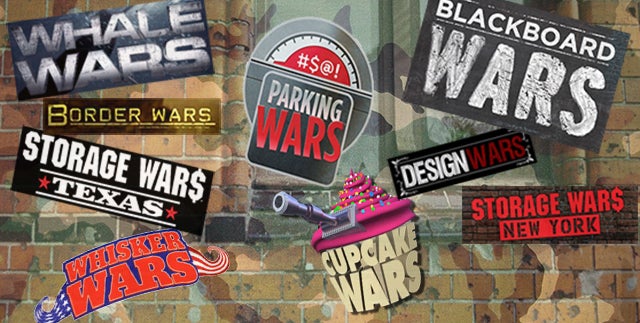 War is hell – except for reality shows.

Americans may be exhausted by the real wars in Afghanistan and Iraq. But we unwind with no fewer than 17 reality shows with “wars” in their titles. They depict so-called wars waged over whiskers, parking spots and cupcakes. The word has lost so much of its impact that the latest show with a “wars” title thought it needed punching up. “Battleground: Rhino Wars,” debuts Thursday on “Animal Planet.”

“It’s actually one of the reasons why we used ‘Battleground’ in the title for ‘Rhino Wars,'” Animal Planet president Marjorie Kaplan told TheWrap. “It’s a way of saying this isn’t ‘Parking Wars,’ this isn’t ‘Storage Wars,’ this isn’t ‘Cupcake Wars.’ This is really a war, and terrible things are happening out there, and somebody needs to stand up and do something about it.”

Animal Planet was near the forefront of the “wars” title trend: It debuted “Whale Wars” soon after A&E’s “Parking Wars” in 2008.

No one takes show titles lightly. Discovery, for example, which owns Animal Planet, bounces ideas off of an “influencer panel” of 15,000 viewers. Other networks combine research with discussions between producers and network executives.

Sometimes they opt for a new and unusual name, as in the case of A&E’s hit “Duck Dynasty.” But more often their titles include one of two reliable words: “War” or “wives.” (Although there are more “war” shows than “wives” shows, it’s close: Besides Bravo’s many “Real Housewives,” there are “Mob Wives,” “Sister Wives,” and “Prison Wives,” among others.)

Kaplan says the word “war” belongs in the title of “Rhino Wars,” because it depicts former U.S. soldiers trying to stop poachers from killing rhinos for their horns. More than 100 South African rangers have died in the conflict, she said.

But she is quick to acknowledge the death toll doesn’t compare with the violence in Iraq or Afghanistan.

“I do think that language can be very powerful, but also that overuse can dilute the power of words,” she said. No one has set out to change the definition of “wars,” of course. But meanings tend to change anyway when words are widely overused.

Everyone realizes that the producers of “Cupcake Wars” are trying to be ironic. But so was the first person to describe a YouTube cat video as “Epic.”

“Epic,” like “awesome,” has come to mean “somewhat cool.”

So what will become of the word war?

It’s a serious question for people who believe that words still have meanings. In 2007, the Associated Press issued a memo to its journalists advising against the use of words like “war” or “battle” to describe relatively trivial events while people were dying in Iraq and Afghanistan.

“Using war terminology to describe disagreements is the worst kind of cliché on an average day,” executive editor Kathleen Carroll wrote. “To use it when people are dying daily in a real war is unseemly.”

But the word “war” is still thrown around. Football commentary is full of references to “bombs” and “blitzes.” Television writers refer to “ratings wars.” New York Times writer Bill Carter called his 2010 book about Conan O’Brien and Jay Leno “The War for Late Night.”

Jonathan Nowzadaran, executive producer of “Shipping Wars,” said the word is so popular because it signals to viewers that a show involves conflict.

“The reference to wars in any show’s title is something the viewer interprets as a competition, and that’s what intrigues them,” he said.

Nowzadaran says viewers have no trouble telling the difference between real and reality wars. The bigger problem, he says, is that a title with “wars” might seem played out.

“That conversation is inevitable because no one wants the viewer to assume it’s a rip-off or a clone of another show,” he said. “Shipping Wars” is one of six A&E series to feature the word “wars,” including three different versions of “Storage Wars.”

That show, which follows parking enforcement officers as they contend with furious drivers, was born from a 2001 documentary of the same name.

“We went through probably about 500 titles for the show, trying to find something that we felt was appropriate,” said executive producer Eddie Barbini. “Nobody could agree on anything. I mean, literally 500 titles, I think, we went through. There was a famous show years ago, ‘Blackboard Jungle,’ a movie. Sort of came out of that. And it is a bit of a war down there, actually. Maybe not the wars that we’re all familiar with, but there is a battle going on, for sure.”

Somehow, despite the popularity of the two words, no one has created “Wives Wars.” But OWN has come close with “Married to the Army: Alaska,” and Lifetime has the scripted series “Army Wives.”