Lena Waithe’s comedy “Twenties” has set the debut date for its second season on BET, and the first season of its very own aftershow, which will be hosted by B. Scott, TheWrap has learned exclusively.

“Twenties” Season 2 will debut Wednesday, Oct. 13 at 10/9c on BET and BET Her, with the first episode of half-hour aftershow, “Twenties After-Show With B. Scott,” debuting immediately after the Season 2 premiere at 10:30.

From creator Waithe, “Twenties” centers on Hattie, a masculine-presenting queer Black woman in her twenties, played by Jonica T. Gibbs (“Good Trouble”) and her two straight best friends, Marie played by Christina Elmore (“Insecure”) and Nia played by Gabrielle Graham (“Possessor”), as they try to find their footing in life, love, and the professional world in Los Angeles, per BET. 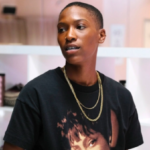 Here’s the official description for the Season 2 premiere, titled “One Night Only?”: Hattie juggles working on her script, settling into a new place, and trying to make it work with Ida B. (played by Sophina Brown). Meanwhile, Nia starts her first day on Cocoa’s Butter, and Marie questions her relationship with Chuck, played by Jevon McFerrin.

According to the ViacomCBS-owned channel, the “Twenties” aftershow hosted by B. Scott, the first trans-nonbinary person to host and executive produce a show at BET, “will provide candid commentary and insights into some of the characters’ mishaps and successes” as B. Scott is “joined by the cast and an esteemed roster of guests including voices from the Black LGBTQ+ community that haven’t always been given a platform to share their personal experiences.”

In the debut episode of “Twenties After-Show With B. Scott,” per BET, “B. Scott sits down with Lena Waithe and Jonica T. Gibbs where they will take a deep dive into the new season discussing, Why Lena took a chance on newcomer Jonica T. Gibbs? Why it is so significant to have a Queer, Black woman as a lead character on TV? How did “Twenties” find its home on BET? And a lot more!”

“Twenties After-Show With B. Scott” is executive produced by Waithe and Rajani, with Rocio Melara overseeing for Hillman Grad; B. Scott under their Ahoskie Productions banner; and Sergio Alfaro, Michael Weinberg, Fernita Wynn, Ray Giuliani for Invent TV. Alberlynne “Abby” Woods is a producer and Rachel Miskowiec is a consultant.