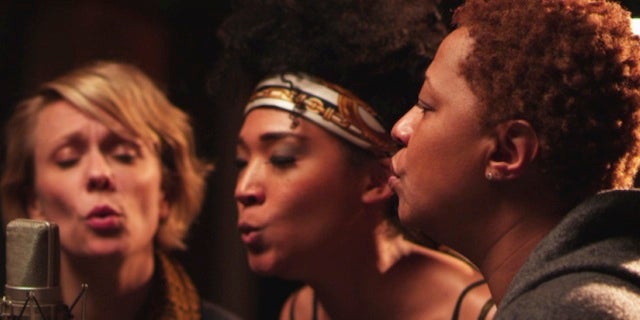 Bruce Springsteen is trying to explain the yawning gulf, which often has little to do with actual talent, between being a backup singer and becoming a star.

“That walk to the front is complicated,” he says, adding a little later, “it can be a pretty long walk.”

Just how complicated and how long becomes clear in “20 Feet From Stardom,” a marvelously entertaining and instructive documentary about the hugely talented women (and a few men) who sing backup behind superstars including Springsteen, the Rolling Stones, Sting and many more.

Some, like Darlene Love, now a feisty 71, have gone on to become stars in their own right. Most of the others tried, at some point, to become solo artists but failed for various reasons including mediocre material, insufficient promotion and or just plain lack of ego or drive.

“20 Feet,” directed by music documentary specialist Morgan Neville (“Troubadours,” “Johnny Cash’s America,” “Respect Yourself: The Stax Records Story” and more) and produced by former A&M Records president Gil Friesen, shows just how gifted these singers are but that talent alone is insufficient to propel one to stardom.

The stories of three women profiled are an instructive study in contrasts. Love found success as a teenager, singing with her sisters and friends she grew up with in California. She was soon recording in studio sessions but she was “ghosting” — other performers took credit for her singing, like girl group The Crystals.

Contractually bound to, and basically indentured by, mega-producer Phil Spector, she grew frustrated, finally quitting the music business altogether and resorting to making a living cleaning houses. Fortunately, one day while attacking grime, her recording of “Christmas (Baby Please Come Home)” played on the radio and she realized she wasn’t meant to push a mop. She moved to New York and resumed her career, finding success as both a solo artist and an actress on Broadway and in the “Lethal Weapon” movies.

Merry Clayton, 64, has a voice that’s just as powerful as Love’s. It’s Clayton who keens “Rape, murder, it’s just a shot away” on the Rolling Stones’ song, “Gimme Shelter.” A self-described diva, she ardently pursued a solo career in the 1970s but failed to find mainstream success. As one of the commentators in the films speculates, maybe there was only room for one Aretha Franklin in the minds of most music fans.

All the ladies here wow you but the one who really sends you to the moon is Lisa Fischer, 54, who has toured with the Rolling Stones since 1989 and also sings backup for Sting and pretty much everyone else in the business. She took at shot at a solo career in the early ’90s, winning a Grammy for her single, “How Can I Ease the Pain.” She never put out a second album. Fischer had neither the ego nor the desire necessary to sustain a solo career. “Singing for me is about sharing,” she says.

Her love of singing and the joy she finds in doing it is shared by all of the performers here.

That’s what comes through, loud and clear, and makes “20 Feet” such a pleasure to watch. Let me rephrase that: not just watch but also to listen to and tap your feet to.