A two-day auction of memorabilia from the “Twilight” film franchise wrapped up on Sunday, hauling in a total of $757,890 on 874 lots.

Among the top-performing items: Bella Swan’s engagement ring, which sold for a whopping $16,800.

Even Bella actress Kristen Stewart would be forced to show some kind of emotion at that kind of figure.

Among the other high earners: Bella and Edward Cullen’s chess set, which took in $13,200, and the Cullen house’s graduation cap display, which fetched $10,200. 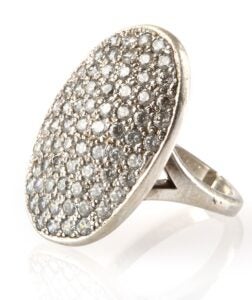 More than 1,000 bidders from 30-plus countries participated in the auction, which took place at TCL Chinese Theatres in Hollywood.

Brandon Alinger, COO of Prop Store, which held the auction, said of the event, “We’re thrilled with the interest and participation in this exclusive auction event. The films have a global following, which was very evident with the worldwide response from bidders over the weekend. For Twilight fans, this auction offered an amazing opportunity to own a piece of the phenomenon and we were proud to partner with Lionsgate on the project.”

And here you were, probably wondering how much you’re going to drop shopping for gifts this holiday season.

From the "Fifty Shades of Grey" board game to a truly scary bit of "Twilight" merchandise, TheWrap has all of your holiday shopping needs covered

'Game of Thrones' Iron Throne Replica: Yes, at $30,000, it's an extravagance. But what better way to let the man in your life know that his home is his castle than this lifesize replica of the Iron Throne from HBO's "Game of Thrones"? Hopefully, he won't lose his head over the whole thing.