It’s fairly standard practice for marketing departments at Hollywood studios to set up Twitter accounts to promote upcoming movies and then leave them to gather digital dust on the internet once the films run their course. But one movie’s Twitter page from six years ago has suddenly come back to life… to attack Donald Trump.

That film is the 2011 remake of “Footloose,” which on Thursday seems to have suddenly had its profile image changed to a picture of Hillary Clinton and its username to “The resistance.” Over the past couple of hours, the account started retweeting videos and tweets criticizing Trump, including a clip of California Sen. Kamala Harris condemning Trump’s firing of FBI Director James Comey on CNN and a clip of Comey’s temporary replacement, Andrew McCabe, denying Trump’s claim that Comey told the president he was not under investigation for potential collusion with Russian officials.

The “Footloose” account has also sent replies to Trump’s tweets, sending taunting messages to the president and pictures of political cartoons and memes painting Trump as a puppet of the Kremlin.

As of the time this article was published, the page still has the verified check mark next to its name, indicating that it is, indeed, the account originally created to promote the “Footloose” remake. Most of the tweets prior to today have been deleted, though a few retweets from 2011 could still be found.

Paramount, the studio that released “Footloose,” did not immediately return TheWrap’s requests for comment. 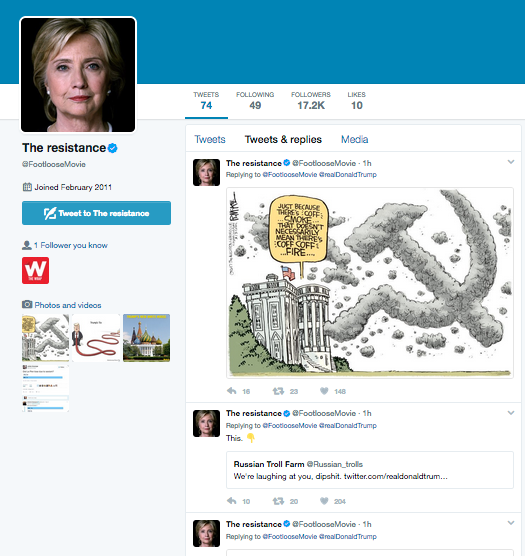