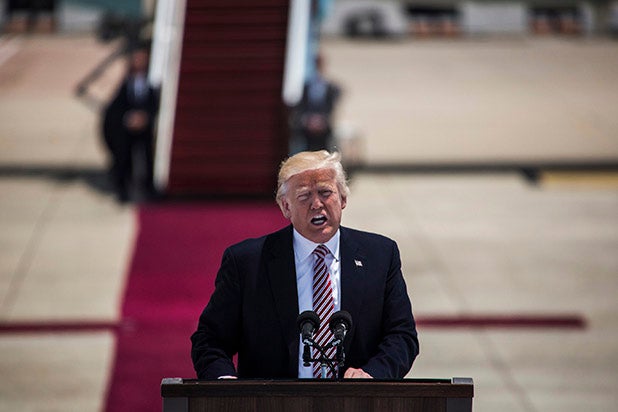 President Donald Trump’s trip to the Western Wall in Jerusalem set off a string of jokes on Twitter on Monday after a photo of the visit left users speculating about the contents of Trump’s prayer note.

Trump’s visit made him the first sitting U.S. president to visit the wall, one of the region’s holiest sites. He was accompanied by First Lady Melania Trump, daughter Ivanka Trump and son-in-law Jared Kushner.

Visitors traditionally leave notes behind in the crevices of the wall in addition to taking a few moments to pray. Barack Obama previously visited the Western Wall as a presidential candidate, and had his prayer note stolen and published.

This is not the first stop of Trump’s trip to the Middle East to inspire mockery on Twitter. A photo of Trump, King Salman of Saudi Arabia and Egyptian President Abdel Fattah el-Sisi holding a glowing orb set social media on fire over the weekend.

Users also had a field day when a video surfaced on Monday, appearing to show Melania swatting her husband away when he reaches to grab her hand as they exit Air Force One in Israel.

Trump inspecting the western wall to get ideas for his. pic.twitter.com/cG3vrI5NCB

This would look classier with gold leaf pic.twitter.com/NsW5Lc2uYB

The note Trump placed in the Western Wall was definitely a copy of that election map pic.twitter.com/C6Z9kf4mgr

Donald Trump leaves a copy of his electoral map win inside the Western Wall. pic.twitter.com/6WgpsCfViO

A nice note by Trump that he just placed in the Western Wall. pic.twitter.com/GVycRqQ3Fj