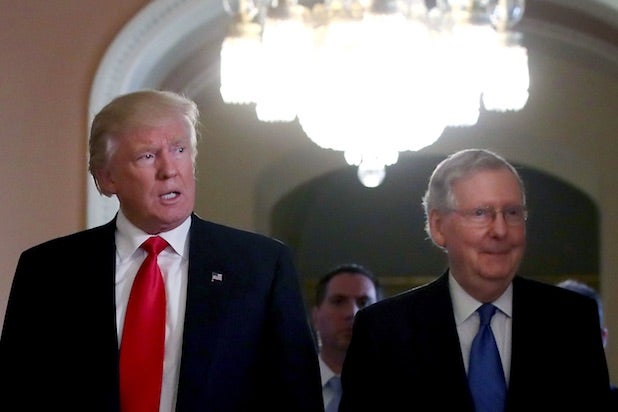 “After multiple appeals from affected users and Leader McConnell’s team confirming their intent to highlight the threats for public discussion, we have reviewed this case more closely,” the company tweeted.

The @Team_Mitch account was locked earlier in the week, after posting the video with protesters saying, among other things, “that instead of falling and injuring his shoulder over the weekend, the GOP leader ‘should have broken his little raggedy, wrinkled-(expletive) neck.'”

“Just stab the motherf–er in the heart, please,” another protester yelled.

The account had been “temporarily locked,” a Twitter spokesperson told TheWrap on Thursday, because the video “violated our violent threats policy, specifically threats involving physical safety.”

Twitter walked back its decision a day after the Republican National Committee and President Trump’s reelection campaign halted all advertising on the platform in response to its action against the @Team_Mitch account.

RNC chief of staff Richard Walters tweeted Thursday the ad boycott would continue until Twitter addressed what he called “disgusting bias” against McConnell.