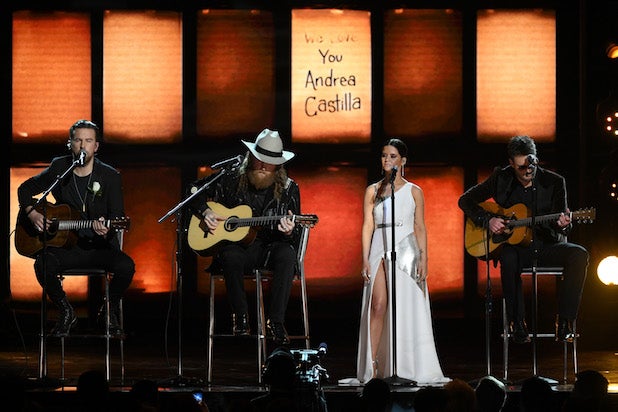 Four country music singers took to the Grammys stage to sing a tribute to the victim of the Las Vegas shooting in October, but a lot of viewers were not fans of their cover of “Tears in Heaven.”

Eric Church, Maren Morris and Brothers Armstrong performed a cover of Eric Clapton’s “Tears in Heaven” as a tribute to the victims of the deadliest mass shooting in recent U.S. history, which took place at a country music festival in October 2017. Two of the artists, Church and Morris, had performed during the three-day Route 91 Harvest Festival in Las Vegas, where 58 people who were shot and killed, and 851 people were injured.

The shooting took place during the last day of the Route 91 Harvest Festival on Oct. 1, while singer Jason Aldean performed on stage. Church performed on the first day of the festival, and Morris appeared on stage there on the second day. Church wrote a song in response to his experience with the shooting, called “Why Not Me.”

The tribute got off on the wrong foot early. Audio issues with Morris’ microphone meant that she couldn’t be heard as she and Church explained the context of the song and honored those who were killed. The audio malfunction undercut the somber moment.

It was the song itself that bugged many viewers, though. Some were specifically bothered by Church’s solo singing performance at the end of the song, where he riffed on Clapton’s original vocals, which they saw as undercutting the song as tribute. Grammys viewers took to Twitter to express how much they weren’t enjoying the performance.

this cover of “Tears in Heaven” is the worst thing i’ve ever seen on television, and i watched the Battlestar Galactica finale. #Grammys

I have never heard a worse cover of an Eric Clapton song than this "Tears In Heaven" performance. The Vegas tribute deserved so much better than whatever that was. #GRAMMYs

Next year they should bring out Clapton to do a Tears In Heaven performance in remembrance of tonight’s tragic rendition.

Not to drag an emotional moment, but that horrendous “Tears in Heaven” performance should get those artists banned from the entertainment industry.

The person in charge of hiring those four country "singers" to perform "Tears In Heaven" should be fired immediately. That was horrendous. #GRAMMYs

Hey Eric Church — just sing the song as Eric Clapton intended. Tears in Heaven is a perfect song and does not need riffs and weird yelling.