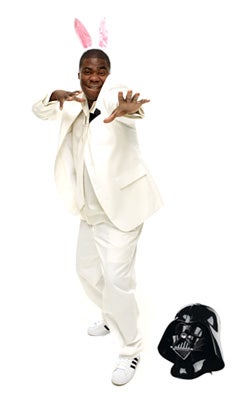 That didn’t take too long.

A day after we posted this item pointing to the campaign to get Tracy Morgan on Twitter, it appears the “30 Rock” star has opened an account.

“my dickhead is shaped liked a darth vadar helmet. my dick is so fat it looks like r2d2.”

This is not what I was thinking it would be, but it’s a fine start.

In other celebritwitter news, Miley Cyrus deleted her Twitter account (presumably to make room for Morgan) -- a move deemed so newsworthy that the Associated Frickin' Press published a story about it.