DON’T LISTEN TO THEM.

Those Adam Lambert fans who’ve been deluging you with tweets about how you have to book the “American Idol” runner-up on the Oscar show? Pretend you never heard them.

Those “Twilight” and “High School Musical” devotees who are convinced the Academy needs Rob and Kristen and Zac and Vanessa? Pay them no mind.

Those “So You Think You Can Dance” fans who love your proposal to bring a little “SYTYCD” to the Kodak Theater? Ignore them. 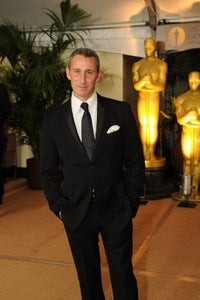 Shankman, left (photo: Michael Yada/AMPAS), who’s co-producing the next Oscars show with Bill Mechanic, asked an innocent little question on Twitter on Sunday afternoon: “Curious: what and who do u wanna see on the Oscars? What would make u watch?”

And then, my oh my, the floodgates opened. Thousands of replies came in over the next several hours (I stopped paying attention around 11 p.m.), with the most popular suggestions being:

1) Adam Lambert!
2) The dancers from “So You Think You Can Dance”
3) Robert Pattinson and Kristen Stewart
4) Did we mention Adam Lambert?
5) Zac Efron and Vanessa Hudgens
6) Neil Patrick Harris
7) Look, if Adam Lambert doesn’t perform, I’m definitely not gonna watch.

Most of the Lambert suggestions, by the way, involved the glam popstar performing his song “Time for Miracles” from that quintessential Oscar-bait movie “2012” – though the fact that one of the song’s co-writers died two months before the film went into production means that the song was not written specifically for the film, and is therefore ineligible for the best-song Oscar.

But, you know, that’s a technicality that apparently pales in the face of the glory that would be a Lambertian Academy Awards … at least in the eyes of the fans who mounted an organized effort to deluge Shankman with their suggestions.

For those of us who cringe at the idea of an Oscar show booked by tweeting teens and heavy on pretty boy (and girl) idols with hot looks but skimpy resumes, perhaps the prospect is not quite so glorious.

Shankman responded several times in the hour after he asked the question, first with a follow-up question (typos intact): “So weird question: would u watch the Oscars with more exitement if I cast some sytycd dancers if there are musical #s”

Then he added that he didn’t necessarily mean that there would be musical numbers on the show – but if there were any, they’d be great, because he’s choreographing himself. At least I think that’s what he said; the actual words (and symbols) he used were these:

“We will C if thr R musical #s :). I h8 musical #s in shows when they dont make sense…. I’m choreographing, so the dancers will b amazing.”

He also pointed out that despite the “big love for rob and Kristen and Zac and Vanessa,” the "die hard fans" of the Oscar show are “anti thT sort of thing.” He later said, “I have a lot to work out! The tweeples have spoken”.

And then, to reassure us die hard fans (or to placate, as one Twitterer surmised, the “geriatric unhip demograph”), he added this: “I promise that the glamour and sense of occasion will be present! It’s the oscRs for god sakes! I’m good at this. They are going to b great”

You can follow the entire unholy mess at Twitter by doing a search on @adammshankman, but you’ll need a lot of spare time (and a strong constitution) to wade through it all. Among the other suggestions, fyi, are these:

“The Cast of ‘Glee’ signing [sic] the Oscar medley.”

“I’d … like to see Steve Martin do a banjo number.”

“if they picked movies that were good I’d totally watch!!!”

Me, I’d tell Shankman that he ought to talk to his co-host Steve Martin some more – that guy knows how to deliver a funny, classy show. And he should think back to the Governors Awards, and how they managed to be loose and collegial and entertaining while maintaining a real respect for film history.

But when somebody tweets “Zefron running around shirtless,” DO NOT LISTEN!

Ignore the tweeples. You know it’s the right thing to do.