“Two Distant Strangers” directors Travon Free and Martin Desmond Roe turned heads at the 2021 Oscars with their coordinating black and gold suits. But their getups weren’t just about style — they also paid tribute to victims of police brutality.

Free and Roe won the Oscar on Sunday for Best Live Action Short Film for “Two Distant Strangers,” which tells the story of a man who gets stuck in a time loop, forcing him to relive his own death at the hands of a cop. In the same vein, the filmmakers wore suits with the names of Black people who have been killed by police in recent years. George Floyd, Daunte Wright, Breonna Taylor, Philando Castile, Tamir Rice, Rayshard Brooks and Stephon Clark were among the names scrawled on the inside lining of the directors’ suit jackets and printed on their shoes.

See a photo of the inside of the suit below. 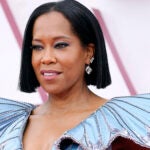 Upon winning their Oscar on Sunday, Free and Roe also took the opportunity to address police brutality in their acceptance speech.

“Two Distant Strangers” was Roe’s second Oscar-nominated project — he was up for the same award in 2012 for writing and co-producing “Buzkashi Boys.”