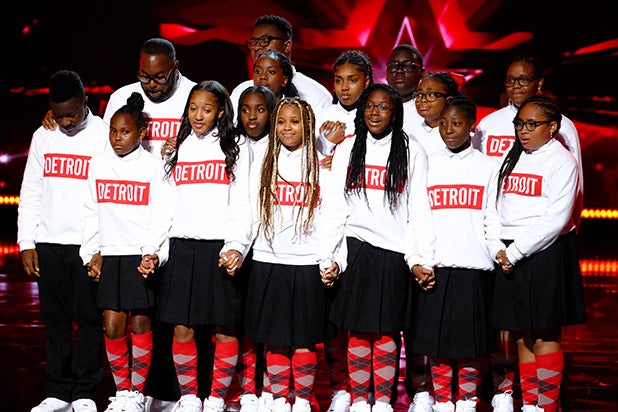 The choir, led by artistic director Anthony White and music director Donnell Mosley, comprises young singers aged eight to 18. The group rose to national fame on the 14th season of NBC’s “America’s Got Talent,” finishing in second place. The group has since used a $1 million gift from the City of Detroit to become an “influential voice for advocacy and change,” according to Blumhouse.

The company is developing two series based on the group, a scripted series from “Queen Sugar” showrunner and executive producer Anthony Sparks and an unscripted docuseries produced by Ross Dinerstein. Michael Seitzman’s Maniac Productions will produce both projects alongside Jason Blum and Jeremy Gold of Blumhouse.

The scripted series, which Sparks will develop and executive produce, is inspired by White’s story “as teacher, mentor and often father figure to more than 1000 kids whose lives he’s impacted and empowered through music in the heart of Detroit over two decades.” The unscripted series is currently in production in Detroit.

“The Detroit Youth Choir embodies the heart, hard work and determination/grit of the people here in the City of Detroit,” White said in a statement. “These youth are amazing at what they do on stage. We’re thrilled to be working with some of the most talented people in the business to help tell our story. We’ve admired Anthony Sparks, Jason Blum, Michael Seitzman and Ross Dinerstein for having created some of the most entertaining, lasting and impactful series and films.”

Added Sparks, “For years I have wanted to create a series that highlights the joys and struggles of what it is to be Black, creative, and dream big in a world that often wants you to remain small or invisible. The fact that I get to do it and fuse my story with the incredibly inspirational story of Anthony White and the Detroit Youth Choir is literally a dream come true. I’m excited to team up with the visionary team at Blumhouse and Michael Seitzman to make some awesome television. I can’t wait to tell these amazingly human and entertaining stories.”