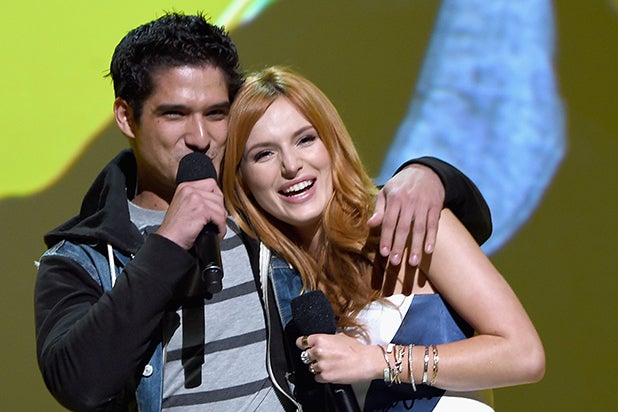 The awards show honors fans who push movies, TV shows, books and comics from subculture to mainstream worldwide success in the past year.

Among the list of this year’s nominees are “Empire” and “How to Get Away with Murder” for Best New Fandom of the Year, and “Star Wars” and One Direction for Feels Freakout of the Year.

“As a complete fan girl myself, I cannot explain how amazing it will be to host the MTV Fandom Awards,” said “My Own Worst Enemy” actress Thorne in a statement Tuesday. “It’s going to be really fun and I can’t wait to hit the stage with Tyler.”

“I had such a blast last year as a nominee and a winner at the MTV Fandom Awards that ‘yes’ was my only answer when I was presented the chance to host the show,” Posey said. “The fans have loved and supported ‘Teen Wolf’ for so long — so this is another cool way to celebrate with them.”

Nominees in the categories “Fandom of the Year,” which features 32 nominees across four brackets including movies, TV dramas, comedies and reality programming, and Ship of the Year (presented by Coca-Cola with voting exclusively on Tumblr), will be announced at a later date.

The MTV Fandom Awards special will premiere July 12 at 8 p.m. ET on MTV.

Best: Amy Schumer was the perfect host -- sending up the year's biggest films with her blunt delivery, and working in a bit of her standup with some healthy plugs for her upcoming Judd Apatow comedy "Trainwreck."