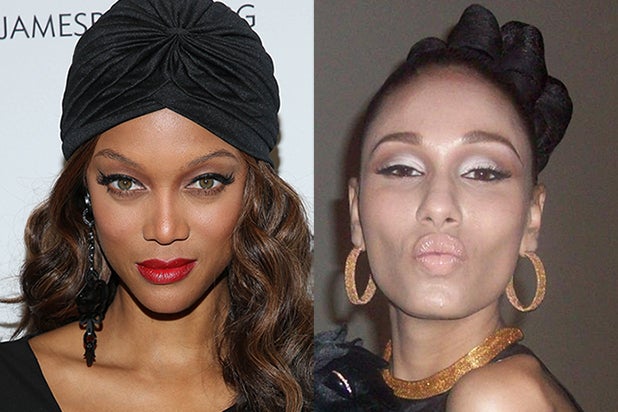 “American’s Next Top Model” host Tyra Banks is being sued by a former contestant on her modeling reality show. Angelea Preston, who appeared on Season 17 of The CW show, alleges she was wrongfully denied the show’s grand prize because of her background as an escort.

Preston is seeking at least $3 million dollars in a lawsuit that was filed in the Los Angeles Superior Court on Wednesday, which names both Banks and the network as defendants. The suit is alleging breach of contract and both intentional and negligent infliction of emotional distress.

The suit goes on to claim that Preston was entitled to the “ANTM” grand prize, which included a $100,000 CoverGirl cosmetics contract and a spread in Vogue Italia, but was disqualified for working as an escort prior to appearing on the reality show.

But according to the suit, her work as an escort didn’t break any of the show’s rules because it happened before she started working on the show. Regardless, the grand prize was awarded to another contestant, Lisa D’Amato.

The lawsuit also alleges that the show’s contestants were subjected to bad working conditions, including working for 12 hours without any meal break.

The CW issued the following statement to TheWrap:

“As noted during the broadcast of the ‘America’s Next Top Model’ finale in 2011, information about Angelea was learned after production wrapped on that cycle that led to her disqualification from the competition. We are confident that her lawsuit has no merit.”

Banks did not immediately respond to TheWrap‘s request for comment.

As TheWrap previously reported, “America’s Next Top Model” was renewed by the network for Season 22 in November.

Pamela Chelin and City News Service contributed to this report.