UPDATED on 6/2/2016 at 11:41 a.m. PT: Sarkar’s victim in Minnesota is believed to be Ashley Hasti, with whom Sarkar had a longstanding relationship

The gunman in Wednesday’s UCLA shooting has been identified as a former doctoral student who was angry with his professor over stolen computer code, TheWrap has learned.

Mainak Sarkar was the second person found dead yesterday in one of the school’s engineering buildings, according to the LAPD. The 38-year-old killed Professor William S. Klug and then himself.

The exact motive for the shooting has not been confirmed, but a blog post reportedly written by Sarkar in March — which has since been deleted — claims that Klug had stolen computer code from him and given it to another student.

“We had personal differences,” Sarkar allegedly said in the post, now cached as a screenshot on Google. “He cleverly stole all my code and gave it another student … Stay away from this sick guy.”

In addition, Sarkar is suspected in the murder of a woman in Minnesota that was committed just prior to when he came to LA. A note found at the UCLA scene led investigators to Sarkar’s residence in Minnesota, where they found a “kill list” that included Klug’s name as well as the female victim, believed to be Sarkar’s ex-girlfriend Ashley Hasti. 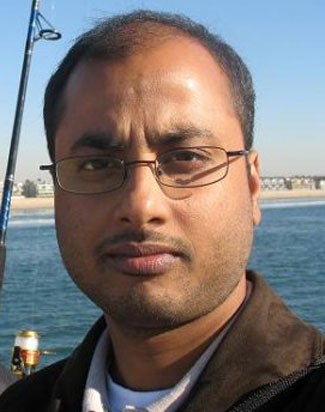 Photo of man believed to be Mainak Sarkar, the gunman in Wednesday’s UCLA shooting.

The UCLA campus was placed on lockdown Wednesday around 10 a.m. local time after reports of an active shooter emerged.

Officers in tactical gear were seen entering Boelter Hall, which is part of the school of engineering. LAPD bomb squad members were also on the scene. Police were advising students to avoid the area. The LAPD pronounced the incident over around 12 p.m.

With finals underway, the school planned to reopen as normal, except for some engineering classes, as of today. “We want to resume normal operations as quickly as possible, so we will resume scheduled classes tomorrow morning,” UCLA Executive Vice Chancellor and Provost Scott Waugh said in a statement. “Faculty, staff and students should show up tomorrow and go through their regular routines and complete the quarter as planned.”