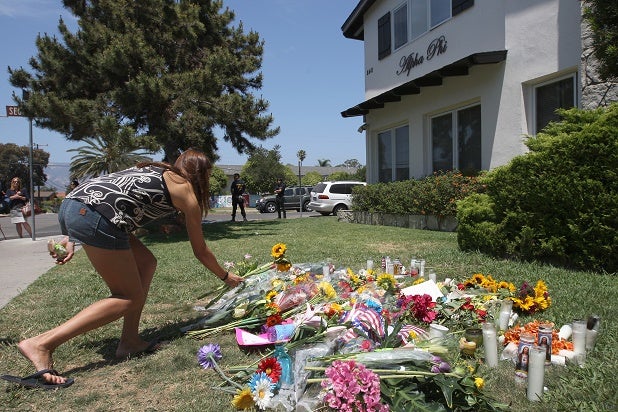 Three victims believed to have been stabbed to death by Elliot Rodger were his two roommates and their friend, the Santa Barbara County Sheriff’s Office said on Sunday.

Police said that they believe Rodger, the son of “Hunger Games” assistant director Peter Rodger, stabbed the victims prior to going on a shooting rampage in the campus community of Isla Vista at around 9:30 Friday night.

The victims were identified as 20-year-old Cheng Yuan Hong and 19-year-old George Chen, both of San Jose, and 20-year-old Weihan Wang of Fremont, Calif.

The three University of California, Santa Barbara students were found dead with multiple stab wounds in Rodger’s apartment, which was on

Seville Road in Isla Vista. Hong and Chen are listed on the lease for the apartment as tenants, along with Rodger. Sheriff’s investigators are in the process of determining whether Wang was also a roommate or visiting the residence.

In all, six innocent people were killed and 13 others were wounded in the rampage. Rodger died in the incident as well, which police now say was from a self-inflicted gunshot wound.

“You heart aches for the families who are all the sudden thrust into a situation like this,” Santa Barbara County Sheriff Bill Brown said. “It’s just particularly disturbing because of the fact that these young victims were taken in the prime of their lives.” The local hospital reported that of the six wounded in the attack, three were in good condition, three others in fair condition and one had been discharged.