Ukraine’s Minister of Culture has branded the portrayal of a Ukrainian character on the Netflix series “Emily in Paris” “offensive.”

Oleksandr Tkachenko commented on the show, which features the character Petra, who is from the Ukraine, in Season 2. In the series, she is involved in shoplifting, and has concerns about being deported – plot points with which Tkachenko took umbrage.

“In ‘Emily in Paris’ we have a caricature of a Ukrainian woman, which is unacceptable. On the other hand, it is also offensive. Will Ukrainians be seen as such abroad? Who steal, want to get everything for free, be afraid of deportation? That should not be the case,” he wrote on his Telegram channel last month, CNN reported on Monday. 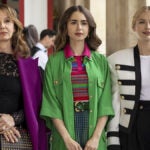 Press in the Ukraine reported that the minister sent a letter of complaint about the character to Netflix, per The Guardian.

Tkachenko said he had seen the show and called the first season “pretty good,” however Season 2 and the Petra character prompted him to speak out. The minister said that while Ukrainian culture makes waves globally with its artists and athletes, there is still more to do to change stereotypes.

“And we will have to continue to fight stereotypes. Because if in the ’90s and 2000s Ukrainian guys were portrayed mostly as gangsters, over time that has changed,” he wrote.

This isn’t the first time “Emily in Paris” — which stars Lily Collins as an American living and working in Paris — has come under fire for its clichéd portrayal of characters. The first season drew the ire of the French for its portrayal of Paris and the city’s citizens.