Following an outbreak of a parasitic infection that shut down production and led NBC to yank the show from a planned post-Olympics premiere date, “Ultimate Slip ‘N Slide” will not air at all this summer, the network confirmed to TheWrap Monday.

NBC and Universal Television Alternative Studio, which is producing the show, are still committed to finding a new, safe location to film the $18 million show and get it on the air, but there is currently no plan in place for resuming production or an estimated window during which the show will premiere.

The series, adapted from the classic backyard waterslide by Wham-O, is hosted by Bobby Moynihan and Ron Funches, who did not contract giardia and according to NBC are healthy and fine. 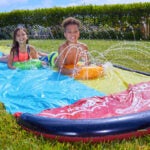 The competition was originally set to premiere Sunday, Aug. 8 at 10:30 p.m. ET/7:30 p.m. PT, after the Tokyo Olympics Closing Ceremony, but was pulled from the schedule on July 2 and no new premiere date or guidance about when the show would debut was given at that time.

“Ultimate Slip ‘N Slide” was shut down June 2, seven weeks into shooting — with another five days to go, including the crucial final competition that had promised a huge cash-prize winner — at the show’s $6 million set in Simi Valley, California, after 65% of the show’s staff were infected by a giardia outbreak that caused multiple cases of “awful explosive diarrhea.”

At least one person on set tested positive for giardia, an intestinal infection caused by a parasite, while multiple individuals reported symptoms, according to Universal Television Alternative Studios, which is producing the show for NBC. Tests on the location’s well, pond, the slide pool, water truck and the restroom sinks all came back negative, but additional testing has revealed giardia in the dirt somewhere on the property, which is frequently used location for multiple productions. This made it impossible to resume shooting the final episodes as the production kicks up dust that could again contaminate the water.

NBC and the studio began scouting for a new, safe new location where the giant Slip ‘n Slide could be moved so production on the end of Season 1 — and potential future seasons — could take place. During that time, Universal Television Alternative Studio was also working on two possible models for finishing the season in the edit bay without the ability to shoot the final episodes, but those options were ultimately passed on in favor of delaying the show.