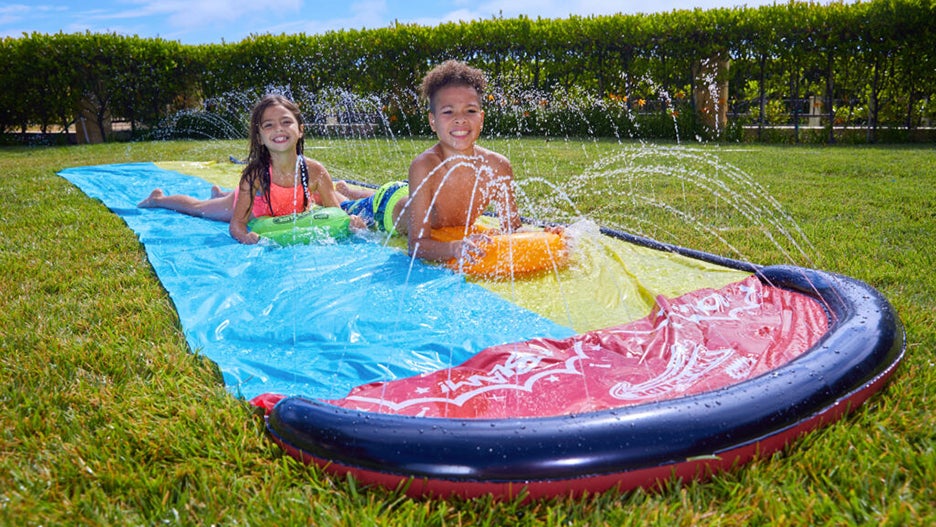 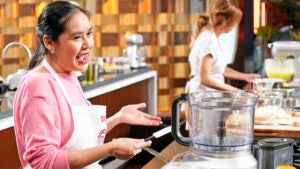 Ratings: ‘MasterChef’ and ‘Crime Scene Kitchen’ Whip Up Another Wednesday Win for Fox

Update July 2: NBC and Universal Television have pulled the show from its planned post-Olympics debut while they figure out how to complete the season. Read more about that here.

A month after a diarrhea outbreak shut down production on NBC’s new competition series “Ultimate Slip ‘N Slide,” the network and Universal Television have yet to figure out how to reshape the $18 million competition show without the final episodes, TheWrap has learned.

With weeks of closed-door meetings and health experts weighing in on options, further details of the outbreak have emerged, including the fact that a stunning 65% of the show’s staff were infected by the giardia outbreak, according to a knowledgeable insider. As TheWrap previously reported, at least one person on set tested positive on June 2 for giardia, an intestinal infection caused by a parasite, while multiple individuals reported symptoms, according to Universal Television Alternative Studios, which is producing the show for NBC.

Tests on the location’s well, pond, the slide pool, water truck and the restroom sinks all came back negative, but additional testing has revealed giardia in the dirt around the set’s 65-foot yellow Slip ‘n Slide, Universal said. This means that there is no way to resume shooting the final episodes as the production kicks up dust that could again contaminate the water.

Universal Television Alternative Studio is currently working through several options for how to handle the show, which was shut down after seven weeks of shooting with another five days to go — including the crucial final competition that had promised a huge cash-prize winner, two individuals close to production told TheWrap. They have ruled out moving or rebuilding the show’s $6 million set from the remote Simi Valley, California, ranch where the giardia outbreak occurred. But the studio is scouting a safe new location to move the large set for potential future seasons. 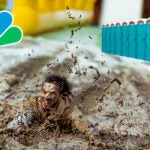 The studio will be presenting two possible models for the season to NBC next week, with the network selecting which will make it to air next month, the insiders said, declining to elaborate on either one. The show is scheduled to premiere Sunday, Aug. 8 at 10:30 p.m. ET/7:30 p.m. PT, in a prominent post-Olympics launch.

NBC declined TheWrap’s request for comment. A representative for Universal Television Alternative Studio reiterated its June 11 statement regarding the production: “The health and safety of everyone on our set is our number one priority, so out of an abundance of caution we have made the decision to stop production of ‘Ultimate Slip ’N Slide’ at the current location. We are in the process of determining next steps in order to complete production.”

As TheWrap previously reported, the series, adapted from the classic backyard waterslide by Wham-O, shut down indefinitely last month after up to 40 crew members fell violently ill during production. According to a person with knowledge of the production, the outbreak of “awful explosive diarrhea” left people “collapsing” on set and “being forced to run into port-o-potties.”

Bobby Moynihan and Ron Funches, who are hosting the series for a coveted post-Tokyo Olympics time slot later this summer, are healthy and fine, a network spokesperson told TheWrap.

Production was shut down on June 2 as the water used on the show’s elaborate set was tested for parasites by the L.A. and Ventura County Health Departments as well as a third-party environmental lab. Tests on the location’s well, pond, the slide pool, water truck and the restroom sinks all came back negative, but on additional testing revealed giardia in the dirt in the surrounding area, Universal said.

The competition promises to be “a fresh take on Wham-O’s iconic 1960s outdoor game,” according to NBC’s description. “This wet-and-wild new series takes the spirit of the classic backyard slide and transforms it into a real-life water park full of gigantic slippery rides with the chance to take home a big cash prize,” the show’s logline continues.

Per NBC, “Ultimate Slip ‘N Slide” features pairs of siblings, best friends, couples and co-workers who will compete in multiple rounds of games, including Human Pong, Body Bowling, Cornhole, Bocce Fall and many more. The original intention was for the two teams that make it to the final challenge to take on “the Big Slipper,” a colossal multipart slide meant for only the bravest and boldest players as it determines who will earn the title of Slip ‘N Slide champion and take home the cash prize. As shooting was unable to be completed, that element of the show will be reworked.

The series is produced by Universal Television Alternative Studio in association with Propagate.