Let’s get the “Sex and the City” comparisons out of the way quickly, shall we? Co-created by “SATC” mastermind Darren Star and Jeffrey Richman (“Modern Family”), “Uncoupled” — the new eight-episode Netflix series headlined by the immensely appealing Neil Patrick Harris, returning to sitcoms nearly a decade after nine seasons as the suit-wearing, womanizing Barney Stinson on “How I Met Your Mother” — centers on the romantic escapades of the emotionally messy but impeccably dressed Michael (Harris) and his trio of closest friends. That includes single mother and straight talker Suzanne (sitcom vet Tisha Campbell), Michael’s partner in the multimillion-dollar Manhattan residential real estate biz; the sex-obsessed Billy (Emerson Brooks), a TV weatherman who never met a younger man he didn’t like; and self-deprecating art dealer Stanley (Brooks Ashmanskas, recently heard as the voice of Gore Vidal in the Woodward and Newman doc “The Last Movie Stars”), who’s so highbrow he sends a naked pen-and-ink sketch to potential hookups. Shades of Carrie, Miranda, Samantha, and Charlotte, yes? And just like “SATC,” “Uncoupled” is filled with postcard-perfect glamour shots of New York City.

And then there are the men, of course. Carrie & Co. didn’t date too many dogs, and one suspects this group won’t either. After he’s unceremoniously dumped by his boyfriend of 17 years, Colin (Tuc Watkins, known to daytime soap fans from “One Life to Live” and to nighttime soap fans from “Desperate Housewives”), Michael plunges well-coiffed head-first into the brave new world of dating apps, dick pics, and prophylactic-free sex. The first guy he lands on Grindr? A brutally hot bisexual Italian businessman played by Gilles Marini. Seriously — who gets that lucky right out of the gate? His subsequent scores — including a blind date with his dad’s dermatologist — are equally easy on the eyes.

But going back onto the market, to use a real estate term, as a gay man of a certain age is no walk in Gramercy Park (aka Michael’s drool-worthy, much-desired Manhattan neighborhood). Condoms have apparently gone the way of subway tokens. Laughs Michael’s millennial make-out partner: “We’ve given condoms and network TV back to the straight people, where they belong.” Botox is now a sex-cessory, à la poppers. (No spoilers here… discover that scene, in episode 5, for yourselves.) And doing Fireball shots during gay ski weekend is a very bad idea. The altitude, darlings! Though are Fireball shots ever a good idea? 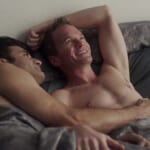 Also Read:
Neil Patrick Harris Gets to Grips With Grindr and the Single Life in Trailer for Netflix Comedy ‘Uncoupled’ (Video)

“It’s so easy for you gay guys,” sighs Suzanne. “The wedding announcements in The New York Times nowadays? Not a vagina or veil in sight — if you don’t count lesbians, which I do, since that’s where I’m heading.” “Uncoupled” does make it look a little easy-breezy; Michael meets two hotties by literally bumping into them. Of course, one collision results in a broken toe (another lesson learned the hard way: Roller-disco can be hazardous for those of us in our 40s). But let’s hope our hero heeds the wisdom of his English Bulldog–toting elegant elder gay neighbor Jack, played by the legendary André De Shields: “I’d rather be alone than be in a relationship just to be in one.”

De Shields, a 2019 Tony winner for his turn as Hermes in “Hadestown,” is just one of a handful of Broadway folks who pop up in Season 1; Harris’ deep roots in the theater community will likely bring in many more. (As a reminder, Harris is a Tony winner himself for the 2014 revival of “Hedwig and the Angry Inch,” and he just finished an acclaimed off-Broadway run as the Baker opposite Sara Bareilles in Stephen Sondheim’s “Into the Woods.”) The songwriting team Marc Shaiman and Scott Wittman appear in the first episode performing “Welcome to Your 50s” — a spoof of their “Hairspray” bop “Welcome to the ’60s” — at Colin’s Limelight-themed surprise 50th birthday party. Also keep your eyes peeled for David Pittu as both a mild-mannered therapist and a sharp-tongued drag queen. 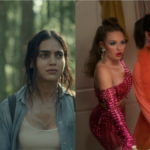