Netflix gem “Undecided: The Movie” may be the funniest film of the year that you haven’t heard of yet.

And that’s kind of strange, too, considering A) it spoofs the biggest topic on your Facebook feed right now, B) the stars’ hilarious political stunts for the mockumentary were covered by numerous cable news networks after they unfolded at various rallies across the country, and C) It sends up both Democratic and Republican candidates and ideology, which should be refreshing to all of those Donald Trump supporters blasting “Saturday Night Live” debate sketches for being “biased” against the GOP candidate.

“Undecided,” a comedy that takes a mockumentary approach similar to Sacha Baron Cohen’s 2006 hit “Borat,” follows two bumbling undecided voters recruited to star in a reality show that tracks their quest through the 2016 primary season to decide on a candidate that best represents their values. The plot is scripted by writer-director Julio DePietro and there are some actors in on the joke, but the moments with other voters and nearly every candidate at rallies across the country are real. And very funny.

Jason Selvig plays John Nelson, a Frat-type guy born into a Republican family and desperately yearning for his father’s love (or any other potential father figure’s love, for that matter), who is matched up with Davram Stiefler’s character, Dan Stiever, a liberal-leaning introvert who is in financial ruin as a result of opening up a restaurant that quickly closed after letting his teenage employees decide on an appropriate living wage: $25 an hour.

Both actors have a string of credits to their name and are part of a comedy duo called The Good Liars, but “Undecided” deserves to be their breakout, since they managed to basically live in character during what seems like a heavily improvised production. And it would have to be, considering the entire movie was dependent on access to presidential candidates including Rick Santorum, Mike Huckabee, Martin O’Malley, Marco Rubio, Ted Cruz, Jeb Bush, Ben Carson, Donald Trump and Hillary Clinton.

The interactions range from the intimate — like Santorum teaching Nelson how to fire a gun and Stiever falling head over heels for his new friend O’Malley — to loud and obnoxious from afar at rallies. Highlights include Cruz’s “weird” and “disgusting” appearance causing Stiever to vomit at a rally, leading to the undecided voters teaming up to exorcise a demon from the confused Texas senator’s “wretched body” in front of his supporters. The two also absolutely love Trump’s rhetoric when he’s making fun of other candidates at the podium — but then quickly become bored when the current GOP nominee begins rambling on about his own life.

“This is boring!” they yell at the businessman-turned-politician before being ejected from the venue. “We came here to be entertained.”

The moment that was cited by Conan O’Brien in a monologue joke for his TBS late-night show, and MSNBC’s Rachel Maddow also made the observation on the air that “it’s always the same two guys” showing up at Clinton rallies. Speaking of which, the Democratic nominee’s campaign actually created an ad centered around the pranksters when they showed up shirtless and yelled, “They’re kicking us out because we don’t have our shirts on.”

“As long as you don’t take anything else off,” Clinton quipped during what Kate McKinnon’s “SNL” charicature would describe as a real human moment. “You know, you gotta make split decisions, that’s what leadership is all about.”

But the Clinton campaign eventually turned on the comedians when they stood behind her during a televised rally wearing “Settle for Hillary” t-shirts. A man escorting them out said the campaign wasn’t “comfortable” with the message. 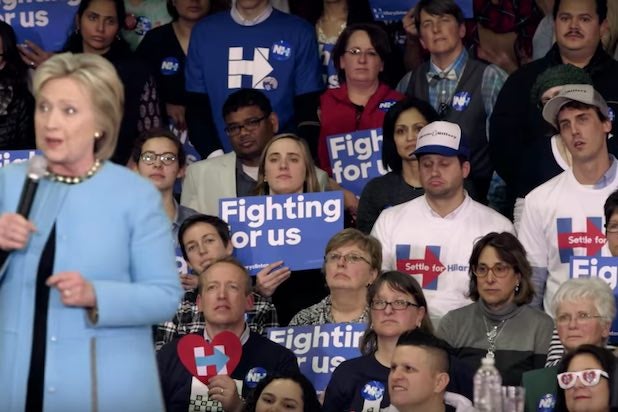 The movie plays off of the characters’ budding friendship and Stiever’s romantic interest in the reality show producer (Jena Friedman) to shape the narrative, which unfortunately isn’t nearly as satisfying as the ridiculous moments captured on camera at rallies. But the plot does help drive the shenanigans. Since Stiever’s love interest thinks Rubio is cute, his perception of the Republican Florida senator is immediately skewed.

“Mr. Rubio, my girlfirend has a crush on you and I’m getting a little bit jealous. What can I do to win her back? I’m getting sad about it. I keep seeing the way she looks at you,” Stiever tells Rubio at one point.

Rubio is initially amused, but things get even more awkward later on when Stiever reaches his breaking point when forced to attend another rally. “That’s enough,” Stiever declares in the middle of Rubio’s speech being covered on C-SPAN. “Marco Rubio is trying to steal my girlfriend. He is! They met in New Hampsire, and she doesn’t look at me in the same way anymore, I don’t see anymore love in her eyes.”

“He’s probably going to steal yours, too,” he shouts to the booing crowd as he is escorted out by security.

If it’s chills you’re in the mood for this Halloween weekend, the comedy actually does offer a terrifying glimpse at dishonesty in the news. In one deliberately offensive gag, the undecided voters decide to wear Trump arm bands to show their support for the candidate, and Fox News reporter Carl Cameron notices. 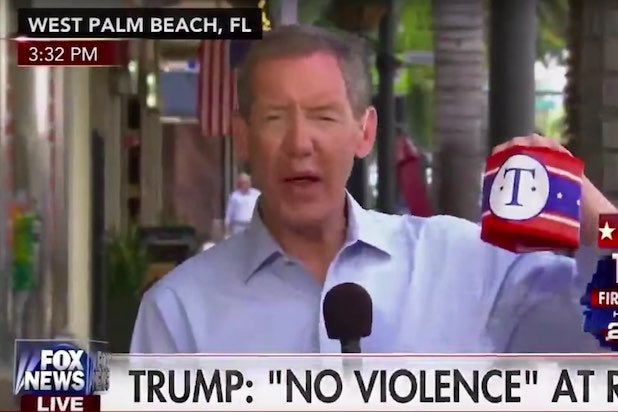 “You’re not concerned that that looks like a Nazi armband, right?” Cameron asks the pair before borrowing a band for a broadcast.

“Two guys said that they were being passed out by the campaign, and that they were free, and it had this feel of sort of fascist, military attire,” Cameron said, while reporting on the air. The scene is intercut with Stiever explaining that was a lie, which should make viewers nervous about what else cable news reporters lie about. And even if Cameron really did honestly believe he heard the comedians say the armbands were being “passed out by the campaign,” it demonstrates just how gullible the media can be.

Then again, Cameron is in good (and powerful) company, since just about every politician the comedians interacted with fell for their act on some level. Dr. Ben Carson, arguably the least powerful of the bunch, even signs a blank prescription note without blinking an eye when Nelson asks for an autograph. The boys then use it to buy pot brownies for a Bernie Sanders rally. Genius.

Watch the trailer for “Undecided: The Movie” below.

”Boyhood,“ ”The Jungle Book“ and the long-awaited ”Gilmore Girls“ revival are among the streaming platform’s November offerings

From a return to Stars Hollow, Connecticut, to an the life of Queen Elizabeth II, there are plenty of streaming options on Netflix this month.