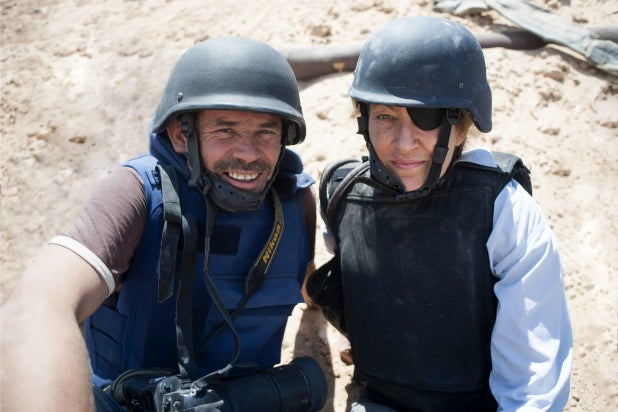 When does sacrifice become sanctimonious? That’s the question that nags in “Under the Wire,” Christopher Martin’s documentary about fallen Sunday Times war correspondent Marie Colvin and her partner, photojournalist Paul Conroy.

Over and over we’re told what a singular person Colvin was, adamant to tell stories about civilian victims in war-ravaged Syria regardless of personal, and arguably foolish, risk. She’d refuse orders to evacuate particularly dangerous areas and would return if she had briefly given in.

And Colvin paid the ultimate price, having been killed in February 2012 in a bombing in the hotbed of Homs that’s rumored to have been a specified attack on the media center in which she worked, a day after delivering an impromptu broadcast on CNN about a child whom she and Conroy watched die. She believed that such a personalized report would move people to act, but her voice was silenced. Was her perpetual insistence worth it?

It’s easy now to regard Colvin as cavalier. But unlike “A Private War” — a fictionalized version of Colvin’s time in Syria in which she’s played by Rosamund Pike — she’s not quite the star of this show, and therefore her bravado doesn’t much detract from the incredible stories showcased here. Conroy wrote the book upon which the film is based and serves as the film’s central mouthpiece; full of twitchy, animated energy, he makes a terrific storyteller who’s boosted by Martin’s selection of found footage along with a minimum of jangly re-creations.

The result is a tale of a most perilous adventure. Conroy is joined by the pair’s interpreter, Wa’el, along with former Sunday Times editor Sean Ryan, Colvin colleague Lindsey Hilsum, and a couple of fellow journalists who lived through the bombing that killed Colvin, an incident that’s covered about an hour into the 95-minute film. Prior to this, we hear about exploits such as Colvin and Conroy entering Syria illegally after being denied visas and their coming across the “widows’ basement,” a place where women and children hid from attacks.

But it’s after the correspondent’s death that the most heart-stopping recountings occur, particularly one about Conroy’s dubious opportunity to get medical attention from a Syrian Red Crescent ambulance at which time he’s given a warning that leads him to turn down the chance.

Despite its hot-button subject, “Under the Wire” doesn’t get into the politics of the conflict, though Conroy admits that he and Colvin found it nearly impossible to stay objective after seeing so much slaughter. She told Anderson Cooper that it was a “complete and utter lie” that Syrian president Bashar al-Assad and the Syrian Armed Forces were targeting only terrorists and not civilians. It was this lie that led Colvin to feel compelled to tell the civilians’ stories; she felt that in exposing the truth, she might serve as a deterrent.

Wa’el and Conroy stick up for Colvin’s principles, with the former claiming that most journalists care only about their paychecks and the latter saying that banging out her reports “is where she shone.” In an unspecified speech, Colvin indirectly said that she did, in fact, believe that sacrificing her safety was worth it.

“I thought journalism can make a difference,” she said. “It’s not in vain.”