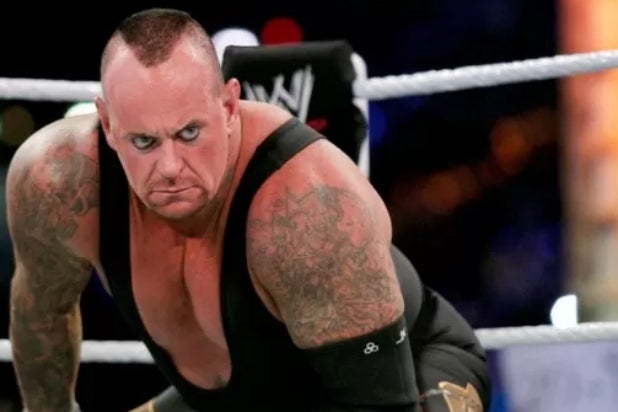 The Undertaker lost a pretty rough main-event match to Roman Reigns last night at WrestleMania 33. His career will probably now Rest. In. Peace.

After the victor made his way to the back, the Dead Man neatly folded his gear and left it in the center of the ring. He then slowly walked over to his real-life wife, gave her a kiss, and solemnly meandered up the extra-long entrance ramp. No one specifically announced it, but by all accounts — and symbolism — Sunday was Mark Calaway’s WWE swan song.

The pro wrestling promotion even welcomed back former commentator Jim Ross to call the final match of the night, making it an extra-special affair. Ross’s wife Jan died just about 10 days earlier, so the “Good ol’ J.R.” appearance spoke volumes about the finality of the fight.

Retirement rumors have loomed large over the 6’10” and 300-pound superstar, as he had been spotted on crutches multiple times recently. The man behind The Undertaker’s robe is 52-years-old, and his big body has taken more than its fair share of bumps over a marvelous career. Calaway didn’t move well last night at all, which was not lost on the WWE Universe, especially on merciless gripe-fest Twitter.

The Undertaker walked away with a phenomenal 23-2 record at WrestleMania. The only other man to defeat the (dead, in character) living legend at the Super Bowl of professional wrestling was Brock Lesnar, who became WWE Universal Champion last night by pinning Goldberg.

Watch “Raw” tonight and “SmackDown Live” tomorrow night to see if The Undertaker makes an official announcement. Both air on the USA Network beginning at 8/7c.