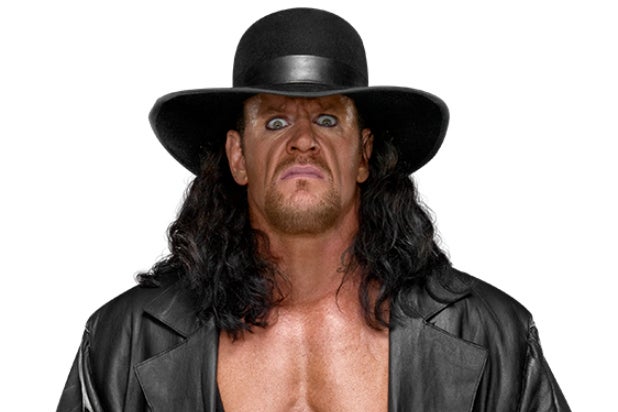 On average, professional wrestlers spend way more time on crutches than the lay person — but seeing the Undertaker this way doesn’t bode well for his potential “WrestleMania 33” participation.

Based on the icon’s size (6-foot-10 and 299 pounds), age, and the many bumps he’s taken, could recent pictures be evidence of the end for the WWE legend?

These days, the 51-year-old Deadman appears to be living up to that moniker, looking every bit his age. In one recent photo, he’s leaning on crutches next to a female Starbucks barista, who has appeared to suffer a wrestling (or coffee-making) injury of her own — check out the boot on her right foot via the picture below.

Some have pointed out that perhaps the grappler — whose real name is Mark William Calaway — may have just borrowed her crutches for a fun photo op (anyone who’s ever sprained an ankle knows that annoying move). Twitter user Zack Lethal shot that theory down by posting a separate picture of Calaway with what looks to be the same crutches in the Undertaker’s pickup truck.

While 51 is definitely elderly in the pro wrestling game, it isn’t completely out of the question for part-timers like Calaway, who is considered one of the strongest men to ever lace up the boots. Of course, 51 is more like 71 when you’ve run (and tight-walked) the ropes as long as he has.

Calaway was last seen on a televised WWE event beating Shane McMahon at April’s “WrestleMania 32.” (Remember Shane O’Mac’s crazy leap of faith?) He’s got until early this coming April to keep his participation streak going. Oh by the way, the Undertaker was not drafted to either “Raw” or “SmackDown Live” rosters this summer — read into that however you want.

Here are the photos making their way around the web today:

Another photo of The Undertaker. You can see the crutches in his trunk which tells you it's his. I hope he heals up soon. pic.twitter.com/teU8Lz0Axu