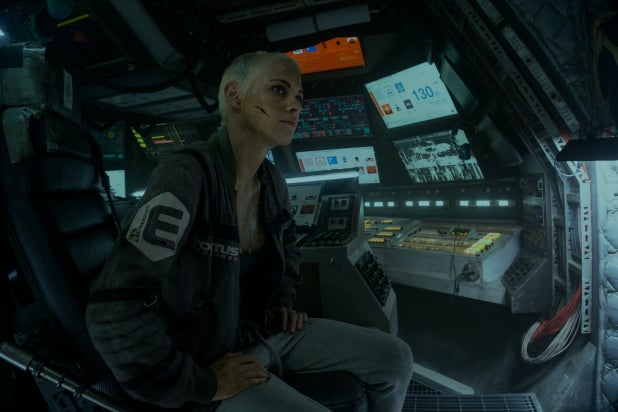 I felt frustrated walking out of “Underwater”: Here’s a movie with good production values, a great leading actress, and a fantastic score, yet it gets so lost trying to figure out what story it wanted to tell that it completely forgets to form a connection with the audience.

Norah (Kristen Stewart) has been underwater for so long, she has lost all sense of time. (The press notes state she’s been there for thirty days, but the film never specifies.) She’s part of a mining crew sent to drill on the ocean floor, deep in the Mariana Trench, and she lives in a sea rig with her co-workers.

As she’s putting on her shoes, what she appears to be an earthquake occurs, destroying the rig. She and the remaining crew — Captain Lucien (Vincent Cassel), Emily (Jessica Henwick, “Iron Fist”), Smith (John Gallagher Jr), Rodrigo (Mamoudou Athie, “Sorry for Your Loss”), and Paul (TJ Miller) — have to devise a plan to walk across the ocean floor and make it to a distant, abandoned rig in hopes of using their communication gear or finding escape pods back to the surface.

But as they start the journey to possible safety, they discover it wasn’t an earthquake that caused the destruction. They aren’t alone at the bottom of the ocean; there’s a school of mysterious, terrifying ghost-octopus-like creatures, and one big mama monster that isn’t about to let anyone escape.

“Underwater” is not “Alien” beneath the sea, although it desperately wants to be, from the close-up of barefoot Norah to having her run around in her underwear (admittedly, there is a plausible reason for this) to the possible “baby” sea monster the crew captures at one point. But the results feel like too little “Alien” and too much “Ad Astra” as it also tries to examine, however briefly, the possibility that nature is fighting back because humans have gone too far.

Writers Brian Duffield (“Insurgent”) and Adam Cozad (“The Legend of Tarzan”) insert all the things that they assume makes “Alien” heroine Ripley the icon that she is, but they haven’t written any story, any relatability, or any connection to anyone actually watching the film. Stewart is a talented actress, for sure, but even she can’t breathe life into this wannabe-empowered heroine. The failure of “Underwater” lands more on the story, or the lack of one, than on her or any of her co-stars.

Where the story is lacking, the sound and score excel. Sound designers Wayne Lemmer and Jack Whittaker create exquisite tension, particularly in close-up shots of Norah in her suit. The focus on the sound of her breathing, from normal to intense, and the way the sound builds in the rigs achieve what the story doesn’t, creating an atmosphere into which the audience can plunge.

The score, by Marco Beltrami (“Ford v. Ferrari”) and Brandon Roberts (“The Twilight Zone” 2019), adds intensity and optimism, at the right moments, and uplifts the performances. Most impressively, it fleshes out the environment, making us feel like we’re at the bottom of the ocean alongside the performers.

Director William Eubank (“The Signal”) assembles the pieces of a good sci-fi thriller, and the production itself is actually pretty impressive. There are a few moments where he takes us inside their suits, and the angles and view capture the claustrophobia that the crew is feeling at that moment.

But Eubanks’ failure to expand on the ideas that could truly terrify an audience dissipate the intensity into a puddle of nothing. There are far too many questions left unanswered — Why would a company hire so many people with traumatic backgrounds and isolate them at the bottom of the ocean? Why are there only a handful of deep-sea pressure suits? Why does the sea monster know how to throw down? — and too much disconnect from any character for audiences to root for anyone or to care about their survival.

“Underwater” tries to float by on the strength of its talented ensemble, but that ship has sunk.