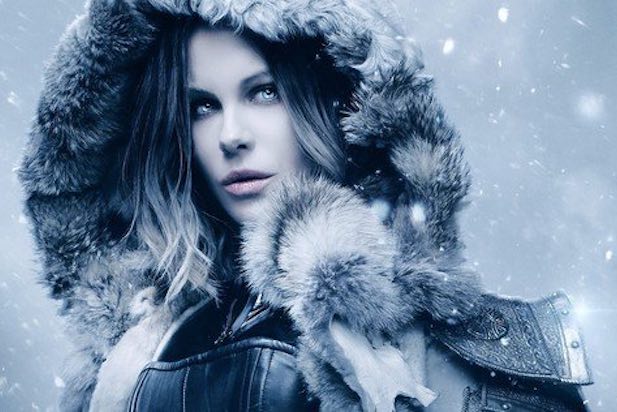 American critics have yet to have the opportunity to pan “Underworld: Blood Wars,” but reviews from around the globe advise readers not to get sucked into paying for this sequel.

Screen Gems’ fifth action flick about the eternal war between vampires, werewolves and Kate Beckinsale has a mere 10 percent approval rating from critics counted on Rotten Tomatoes, so far, ahead of its domestic release in U.S. theaters this weekend.

Out of 20 the reviews available from outlets in countries including Australia, Argentina, Egypt, China and Mexico, only two were declared “fresh.”

One of those was United Arab Emirates site The National. Critic Chris Newbould said fans of the franchise should be pleased with the latest “bloodbath of vampire-on-lycan violence.”

“We’re here for a 90-minute bloodbath of vampire-on-lycan violence, moody shots of gothic buildings, desolate landscapes and unearthly skies, and, quite simply, Kate Beckinsale,” Newbould wrote. “‘Blood Wars’ is unlikely to convert many new fans to the Underworld cause, but for the sizeable army of existing devotees, it delivers admirably on every front.”

On the flip side, here’s a sampling of the rotten reviews written in English.

“If you make the mistake of seeing ‘Underworld: Blood Wars’ (don’t) you may find yourself longing for the nuanced subtlety of the original ‘Underworld’ or the Wildean wit of ‘Rise of the Lycans’ … Of all the many sins that ‘Underworld: Blood Wars’ commits, the most egregious is the fact that it doesn’t have a proper ending. The frequently hinted at McGuffin-daughter-with-the-magic-blood subplot remains unresolved except for a last minute stinger designed to excite audience members for the next chapter in the ‘Underworld’ franchise. If it’s anything like this flat, inert, tour-de-force of mopey wankers you’d be better off staying home and doing literally anything else.”

“Now we’ve reached the fifth Underworld in the series, however, it definitely feels ‘worse’ over ‘better’ … Though this is ultimately a movie about a bump in the night grudge match of vampires vs werewolves, there are some plot conveniences that detract from one of the core tenets of the series: namely, taking the material seriously. The reason ‘Underworld’s’ silliness has worked so well (in stretches) in the older movies is that the respective writers, directors and cast take the material seriously, offering a hilarious ‘Batman Begins’-like acceptance of larger-than-life warriors. ‘Blood Wars,’ though, commits the cardinal sin of breaking the rules of its own universe in an effort to offer sequel escalation.

“As ponderous and cliché-ridden as its predecessors, …’Blood Wars’ is weighted down by an abundance of dull dialogue, tacky effects and murky cinematography. It’s a suckfest that is unarguably the bottom of the barrel in the action-horror genre … There’s nothing even remotely exciting about the shootouts or the fang-and- sword clashes, which peter out in listless resolution. Worse, the possibility of another Underworld looms by the end of it all. Give us a break!”

“In ‘Underworld: Blood Wars,’ fangs and claws stay sharp, while leather outfits and flowing locks still shine; alas, there’s little other bite or gloss to the fifth instalment in the vampires-versus-werewolves franchise. In an exercise in series continuation that struggles to conjure up any chapter-specific intrigue, the two supernatural creatures once again do battle.”

“The ‘Underworld’ series understands that its core selling point remains the acrobatic Beckinsale in body-hugging leather. ‘Twilight’ has inadvertently helped maintain interest in the vampire/werewolf rivalry, but five films in, the formula is reaching the sharp end of its claw … That said, ‘Blood Wars’ is certainly a step up from its nonsensical predecessor, ‘Awakening’ (2012), and there are some standout scenery-chewing performances, not least Lara Pulver as scheming seductress Semira. Finishing with yet another cliffhanger, this isn’t the end for Selene, but the series is in desperate need of new blood and more bite in order to survive much longer.”

“Well that’s the story buried in a vast amount of exposition, a first half hour which suffers from low blood sugar, and a finale that suggests that if this was a videogame, it would be a pretty stupid one. Having two characters who are impervious to bullets standing there machine gunning each other is really a waste of joystick calories and action movie decibels … the only sequel ‘Blood World’ gave me an urge to watch is the one to ‘What We Do in the Shadows.'”

“The ‘Underworld’ action-horror series is premised on a struggle between vampires and werewolves waged over the heads of ordinary folk – which, all things considered, could be a viable metaphor for the state of the planet. But ‘Underworld: Blood Wars,’ the fifth instalment, has little to recommend it on any level. … It’s tempting to imagine a parody that would show the mundane world intruding on the fantasy, pitting Beckinsale against, say, Melissa McCarthy as an eager vampire buff. That still probably wouldn’t be a good movie, but it would have to be better than this one.”