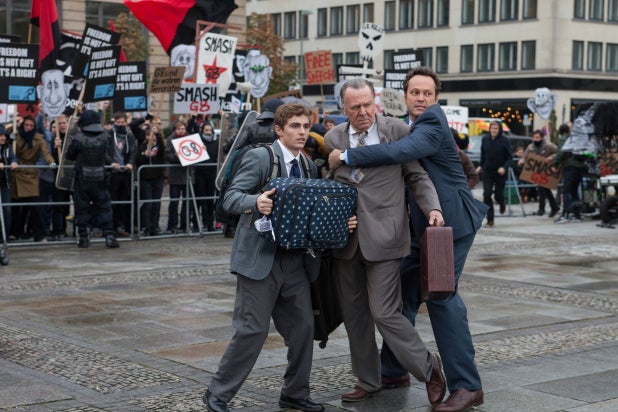 The new Vince Vaughn R-rated comedy “Unfinished Business” is taking a beating from critics across the country ahead of its opening weekend. In the film, Vaughn stars alongside Tom Wilkinson and Dave Franco as three business associates who travel to Europe together to close a major deal, only for everything to go unimaginably wrong.

TheWrap’s Alonso Duralde wrote in his review of the film, “It’s not impossible to mix sentimentality, raunch, corporate gamesmanship and the G-8 Summit in a comedy, but this one doesn’t pull it off.

“Vaughn blusters in his usual manner, combining the swimming-up-career-stream desperation of his ‘The Internship’ character with the brash-but-loving family guy of ‘Delivery Man,’ but the remove he brings to every performance — as though he were putting everything in quotes — becomes more disconcerting the further away he moves from the young slackers he used to play,” Duralde said.

Duralde, believe it or not, was one of the kinder reviews. Richard Roeper wrote in the Chicago Sun-Times, “Nearly everything about this movie feels like a task half-completed.

“After seeing the wretched, wandering mess that is ‘Unfinished Business,’ I’m wondering if some studio executive scribbled those words on the front page of the script as a commentary instead of a suggested title.”

Gary Goldstein of the Los Angeles Times echoed that sentiment when he wrote, “The piece of business that’s most unfinished in the desperate comedy ‘Unfinished Business’ is the wan hodgepodge of a script by Steve Conrad, a talented screenwriter (‘The Promotion,’ ‘The Pursuit of Happyness’) who should’ve known better.”

Nathan Rabin of The Dissolve gave the film a particularly harsh review, writing: “Glacially paced and devoid of laughs and life, ‘Unfinished Business’ makes audiences sit through an entire film for the opportunity to see Vaughn trade in his permanent frown for the cocky grin that seems to come effortlessly in his other, better movies.”

Likewise for Joe Neumaier of the New York Daily News, who wrote: “Director Ken Scott, who guided Vaughn in last year’s flop ‘Delivery Man,’ has the kind of comic timing you’d expect from a corporate compliance officer’s PowerPoint presentation on updates to Section 1.6045-5 (b) (1) regulations. And Vaughn can’t save his doomed project by being ‘Vince Vaughn,’ the motormouthed charmer who is automatically funny if this is still 2005.”