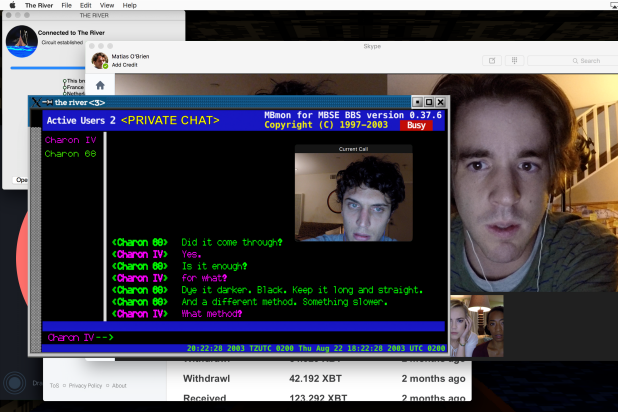 There’s a glimmer of a good idea in “Unfriended: Dark Web.” Unfortunately, it’s already been exploited, and to better effect, in 2015’s squirmily relatable “Unfriended.”

The latter cost a million bucks to make and took in $64 million, so you can see why horror shingle Blumhouse wanted to revisit the well. But this time, the bucket’s pretty dry.

The retread jettisons sociological insight for a grim and generally joyless journey that feels entirely obligatory. Where the first film tapped into the Internet’s unavoidable underbelly — cyberbullies, trolls, obsessive FOMO — the second never settles on a persuasive POV.

Also Read: 'Unfriended' Review: Cyberbullying Teens Haunted by the Facebook of the Dead

Colin Woodell (soon to star in the TV spinoff of “The Purge”) plays amateur programmer Matty. When he finds an abandoned laptop at a coffee shop, he can’t resist taking it home. But nothing’s truly free in this world, and his shiny new MacBook comes with a few unfortunate bugs.

The entire movie unfolds via the 21st century version of found footage: texts and video chats on Matty’s computer screen. This is less annoying than it sounds; in fact, it’s pretty compelling at first, since each window that pops up brings more trouble.

While Matty’s Skyping through game night with his far-flung BFFs, another unknown user appears, calling himself Charon. As Wikipedia clarifies, Charon is the ferryman to Hades. So it’s not exactly surprising when he directs Matty to a folder on the computer’s hard drive, to find appalling videos of women being killed.

Were Matty to make the reasonable choice here — close the computer, bring it to the nearest police station — we wouldn’t have a movie. So instead he accepts a Bitcoin payment of $10 million, thereby obligating him to make Charon’s next snuff film.

Should Matty fail, his friends will pay the price. His girlfriend, Amaya (Stephanie Nogueras, “Switched at Birth”), who is deaf and skipped the group chat, remains unaware of the impending threat. But AJ (Connor Del Rio, “Level Up”), a conspiracy fan who lives in his mom’s basement, and Damon (standout Andrew Lees, “The Originals”), a techie who understands more about the dark web than his friends, watch the increasing demands on Matty’s screen with terror.

So do hipster DJ Lexx (Savira Windyani, “The Mindy Project”) and newly-engaged couple Serena (Rebecca Rittenhouse) and Nari (Betty Gabriel, who played the housekeeper in Blumhouse smash “Get Out,” and deserves better).

Nari insists they contact the police, but Charon is the kind of dude who spends his time hiring online fetish killers via Bitcoin. He’s obviously not going to let these meddling kids get the best of him. Before long, he’s hacked into their computers and phones and can see everything they do. If they get up, or make a call to anyone else, they die.

Obviously, every horror movie requires considerable suspension of disbelief, but the most successful scares are relatable ones. That’s why the first “Unfriended,” which dug into the dark side of social media, struck a chord. There’s more than enough to work with here, too — the actual dark web is packed with grotesque potential — but we spend hardly any time there.

The fact that Amaya is deaf suggests an interesting thread about modes of communication, but it goes nowhere. And isn’t the movie’s basic concept — that we’re all being watched, all the time — a nightmare in and of itself, without all the frills?

Should you stick around until the end, you’ll be rewarded with a kicker that suggests a grander and more imaginative vision. But for the most part, writer-director Stephen Susco (“The Grudge”) sees the Internet as a gimmick, a way to get some attractive, disposable protagonists from Point A to Point B. (Point A is “alive,” so…)

And when horror movies take the lazy route, like when our heroes repeatedly behave in egregiously idiotic ways, we get sidetracked. Among the questions that may pop into your wandering mind: None of these millennials think to put some tape over their laptop cameras? Or have a spare device with which they can secretly communicate? And why aren’t Charon’s widespread crew of lawbreakers remotely concerned about being caught on camera themselves?

Meanwhile, the setup takes so long that we only get one satisfyingly complex payoff. By the time we reach the Dire Consequences, Susco has to condense them into a quick and oddly perfunctory roundup. If Charon is savvy enough to turn the web into his personal playground, surely he could have figured out how to stream “Final Destination” first, for a little inspiration.