Fast Company has a very interesting flyover of Dubai, where the ambitions to build a whole bunch of theme parks have dwindled to a heap of sand. Blame the falling price of oil and the crumbling fortunes of the global financial markets.

But — how can we say this gently? THEY OVERBUILT LIKE CRAZY.

(Here’s the proposed theme park, below.) 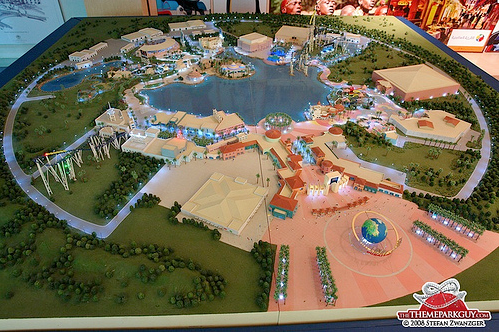 And here’s what is really there today: 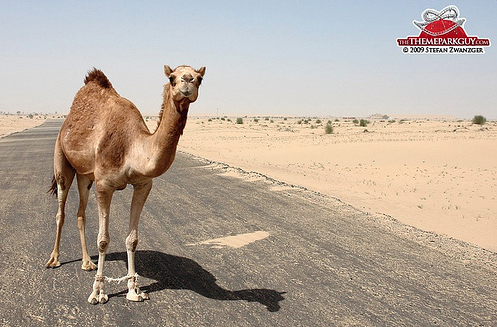 I was in Dubai last year, as the markets were collapsing. If you picked up any map of the city, more than half of what was on it was marked u/d — meaning, under development.

Now it looks like a lot of that development won’t happen. Fast Company gives us the timeline: April 2007, the $1.2 billion project is announced.

and notably, no construction movement on the ground in months.

Meanwhile, the AP has coincidentally taken on the same topic, and asked questions of the powers that be.

"Was Dubailand a sound idea? In part yes," David Camp, director at ERA Aecom, whose consulting firm was involved in early plans for the site, told the news wire. "But it got carried away, like most of Dubai."

And here’s the official poop:

Dubailand Senior Vice President Mohammed al-Habbai said in a brief written statement: "There is no change to the vision of Dubailand and we can reaffirm that all our projects will be developed and delivered to completion."

He gave no timeframe, saying only that the project "was designed as a phased development to be built over a number of years."

It looks as though Dubailand, which was also supposed to have Six Flags and Legoland, and was meant to help Dubai draw 15 million tourists a year to the spit of sand alongside the Persian Gulf, will not come to be.