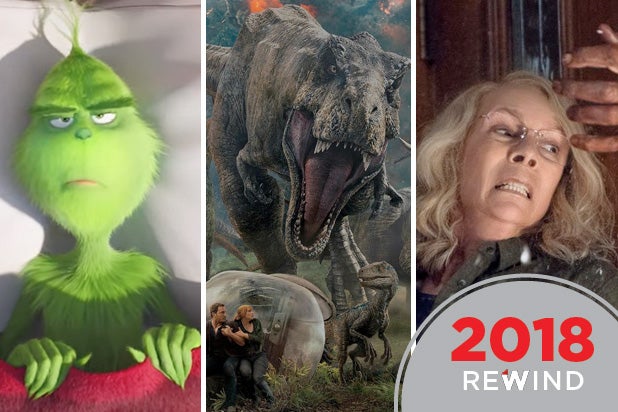 To understand the success that Universal has kept up over the past decade, you need only look at the production budgets and genres for the studio’s three highest grossing films in 2018: $170 million for the dinosaur blockbuster “Jurassic World: Fallen Kingdom,” $75 million for the animated Dr. Seuss adaptation “The Grinch,” and $10 million for a belated installment in the venerable horror series “Halloween.”

The result was a domestic annual total of more than $1.7 billion, 17 percent more than 2017’s total gross. And that gross jumps to $1.9 billion if you factor in Universal’s indie distribution wing, Focus Features. “The most consistent performers are obviously Disney, that has been in a league of its own, Universal and Warner Bros. have been back-to-back 2 and 3,” said Tuna Amobi, media analyst at CFRA Research.

Universal’s big moneymaker was “Jurassic World: Fallen Kingdom,” a sequel that proved the 2015 revival of “Jurassic Park” was so much more than just a single megahit. “Fallen Kingdom” was the only film in the top five highest-grossing movies of the year not based on superheroes, an it grossed an impressive $1.3 billion worldwide. Add the first “Jurassic World” to that total, and you have a global total of $2.97 billion, putting this dino series alongside “Fast & Furious” as Universal’s biggest global moneymaker.

“Universal has made its mark this year by consistently offering up a diverse slate of films that have left no audience segment in the cold,” comScore analyst Paul Dergarabedian said.

The lack of a “F&F” film or a “Despicable Me” did lead to a drop in Universal’s overseas grosses compared to 2017, but with sequels for those films in development, there’s reason to believe there will be a rebound.

Meanwhile, Illumination continues to build its status as a name-recognition studio with family audiences in the U.S., as “The Grinch” outgrossed sequels to “Wreck-It Ralph” and “Fantastic Beasts” with more than $250 million domestic gross. With Universal adding DreamWorks Animation to its slate next year, 2019 should see the studio continue to bring in families with sequels to “How to Train Your Dragon” and ‘The Secret Life of Pets.”

And then there’s Jason Blum’s Universal-based Blumhouse, which has had the biggest year in its 18-year history thanks to a rare Oscar screenplay victory for Jordan Peele’s horror film “Get Out.” He followed in October with “Halloween,” a widely praised return of the classic horror franchise that earned $253 million worldwide. (Star Jamie Lee Curtis also scored the biggest opening weekend for a movie starring a woman over the age of 55.)

Universal also had some solid mid-budget success with other films starring women, including the $29 million Tiffany Haddish comedy “Night School,” which took in $102 million worldwide, against a $29 million budget) and the $75 million ABBA musical sequel “Mamma Mia! Here We Go Again,” which snagged $393 million.

Meanwhile, indie wing Focus Features had another strong year on the awards circuit, starting with an awards campaign for “Darkest Hour” and “Phantom Thread” that led to 12 Oscar nominations and three wins. This year’s Oscar contenders include some genuine art-house hits like Spike Lee’s “BlacKkKlansman” ($48.2 million) and Morgan Neville’s Mister Rogers doc “Won’t You Be My Neighbor?” ($22.6 million). In total, Focus grossed $155.7 million so far this year, up from $115 million in 2017.

Not everything has connected with audiences. Despite a major campaign that included IMAX support, Universal hasn’t been able to make “First Man” into a serious awards contender. And the Neil Armstrong biopic has only just reached $100 million worldwide — well below the $446 million made by Damien Chazelle and Ryan Gosling’s previous collaboration, “La La Land.”

The year also ended with the Peter Jackson-produced fantasy “Mortal Engines” flopping at the box office, opening to just $42.3 million worldwide against a $100 million-plus budget.