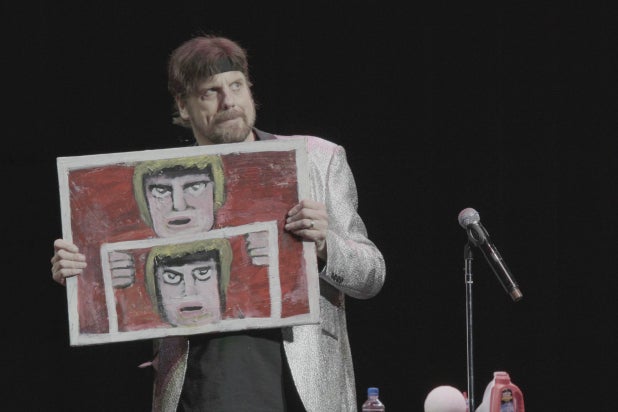 You know you’re in for a wild ride whenever a nonfiction film begins with a disclaimer. And there’s an especially promising slyness to the one that opens Ben Berman’s meta-portrait of standup comic and magician John Szeles. The movie was originally called “Untitled Amazing Johnathan Documentary” when it appeared at Sundance, a pointedly noncommittal name that hinted at some uncertainty. The “Untitled” has been dropped for theatrical release, but audiences are still warned that “everything in this film is strictly based on the available facts.” If you appreciate the passive aggression of that deceptively mild “available,” this is definitely the movie for you.

And it only gets better from there. Just a few minutes in, Berman asks Szeles’ Amazon Echo, “What is the best Amazing Johnathan documentary?”

“The jury,” Alexa coldly replies, “is still out on that one.”

Also Read: 'Ready or Not' Film Review: The Game of Hide and Seek's Afoot in Twisty, Violent Dark Comedy

As things unfold, this turns out to be necessarily accurate. But Berman, a TV vet making his feature debut, has crafted such an aptly-pitched tribute to a notorious mischief-maker that it’ll be a hard one to beat.

Not that he doesn’t have competition. In the first of many surprises, he discovers that Szeles has been secretly weighing all his legacy-building options. And Berman seems to be coming in towards the bottom.

He probably shouldn’t have been too shocked about this. The Amazing Johnathan, who is both an outré comedian and an extreme illusionist, has built his career on unreliability. But in 2007, Szeles was diagnosed with a heart condition called cardiomyopathy. In 2014, after doctors gave him one more year to live, he shared his devastating prognosis with fans and retired.

In 2017, Berman arrives at Szeles’ mess-strewn Vegas mansion to start shooting the documentary. At first, all goes smoothly. But then cracks start to appear. For one thing, Szeles’ health issues may stem less from his heart condition than from a considerable meth habit. For another, Berman keeps showing up to find a different camera crew already there. And for a third, well, it’s three years after his dramatic retirement, and the 60-year-old Szeles is still very much alive.

Even the requisite, peppy talking-head soundbites, with Szeles colleagues like “Weird Al” Yankovic, Judy Gold and Carrot Top, soon become more about the director’s dilemmas. Is Szeles pulling some sort of Andy Kaufman-esque long con? Or should Berman be ashamed for even contemplating such a cynical question? And why is he so determined to make this seemingly-doomed movie in the first place?

Eventually, we learn far more about the director than we ever know about his subject. On the one hand, Berman makes a strong case for skipping a traditional approach. On the other, his inexperience is evident throughout, from the inartful visuals and overlooked details to several awkwardly-staged scenarios.

But he’s a deft puzzle-builder, and smart enough to handle his risky, self-conscious (and potentially self-aggrandizing) approach by constantly upping the suspense. What will Szeles do next? How will Berman respond?

At one point, this alternately weird and amusing game of chicken — which is reminiscent of the alternately weird and amusing shows Berman has worked on, like “Comedy Bang! Bang!” and “Tim and Eric Nite Live” — leads to a decision so preposterous, you have to wonder if it’s real. From there, it’s a craftily-guided slope into deep questions about the nature of nonfiction filmmaking. What are Berman’s responsibilities to his subject? Or to us? Most of all, is it even possible to make a purely truthful film?

Well no, of course not. Every edit, camera angle, and moment depicted onscreen is always the result of a very conscious choice. Turns out though, Berman is way ahead of you. Szeles might be, too. By the end, it’s impossible to say.

But there is this: both of them — two apparent adversaries, one of whom announced his imminent death years ago — appeared together for movie’s premiere at the Sundance Film Festival in January.