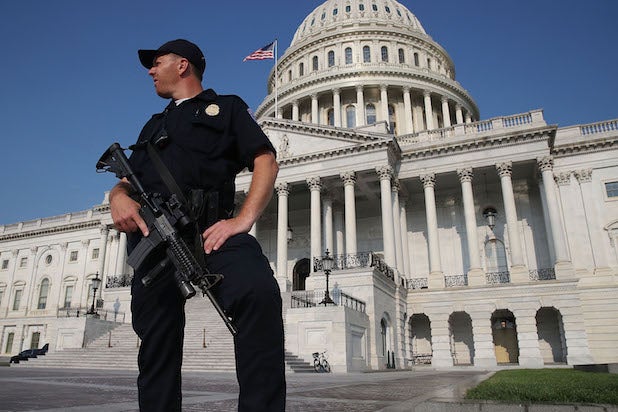 A U.S. Capitol police officer died and another was injured after a man rammed a vehicle into a police barricade outside the Capitol building on Friday.

Capitol Police Acting Chief Yogananda Pittman told reporters on Friday afternoon, “At this time, the suspect has been pronounced deceased. Two U.S. Capitol police officers were transported to two different hospitals. And it is with a very, very heavy heart that I announce one of our officers has succumbed to his injuries.”

Earlier on Friday, the Capitol Police account tweeted, “CRITICAL INCIDENT: USCP is responding to the North Barricade vehicle access point along Independence Avenue for reports someone rammed a vehicle into two USCP officers. A suspect is in custody. Both officers are injured. All three have been transported to the hospital.” The account later amended the tweet to correct the location to Constitution Avenue.

According to NBC News, the suspect emerged from the car with a knife and was shot by officers. He died a short a time later.

Reporters like Fox News’ Chad Pergram confirmed online that they were locked down: “Capitol locked down. Car crashed into barrier on Senate side off of Constitution Avenue. This is where they shrunk the perimeter a few weeks ago.”

The Capitol was the site of a massive protest that turned into a riot on Jan. 6, when supporters of then-President Donald Trump stormed the building as Congress met to certify the election victory of President Joe Biden. Five died as a result of that riot, including a Capitol police officer. Two more officers died by suicide in the coming days. Security around the area was heightened, which accounts for the “perimeter” Pergram referred to in his tweet.

Large police presence and two stretchers being brought out pic.twitter.com/EmidoLP0PT