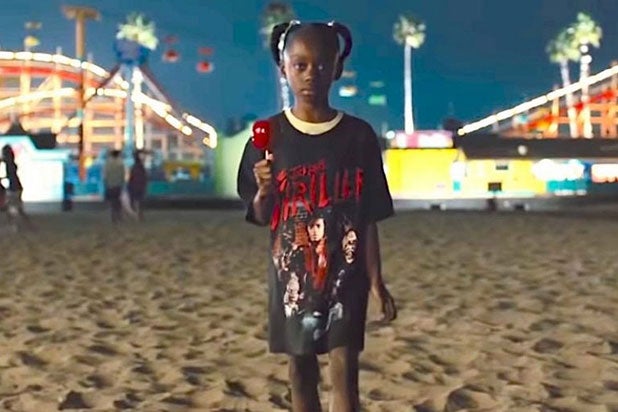 (Major spoiler alert: Do not read on if you haven’t seen Jordan Peele’s “Us.”)

Jordan Peele’s “Us” is chock full of references to Michael Jackson, starting when Lupita Nyongo’s younger self wins a “Thriller” t-shirt at the Santa Cruz boardwalk in the 1980s.

But Peele and his costume designer Kym Barrett threw several more nods to the late King of Pop, who is back in the news given the documentary “Leaving Neverland,” in which two men accuse Jackson of sexual abuse (accusations that his estate has disputed).

The doppelgängers in the film, or The Tethered, wear red jumpsuits and one single glove — just as Jackson wore a red outfit during his famed 1983 music video “Thriller,” and Jackson’s single white glove covered in silver sequins made its TV debut during his performance of “Billy Jean” at Motown’s 25th anniversary in 1983. The single glove would become a signature style throughout the rest of his career.

“There are a lot of references running throughout the movie and there’s a lot of nodding and homages to different directors and different horror movies,” Barrett told TheWrap. “The leader of The Tethered has had access to that T-shirt and she knows who Michael Jackson is. She’s seen imagery and she’s seen like the Hands Across America T-shirt, there’s a lot of imagery which she’s seen.

“When it’s time to have the exodus from the tunnel to the top world, that’s an 8-year-old’s jumbled-up impression of the world and it’s regurgitated out into the choice of the red jumpsuit,” she added. “She sees Hands Across America, the cut-out people reinforced by a guy who looks a bit scary and has a red jacket and glove on — it’s memories from a child that is later turned to the red jumpsuit and the glove.”

The “Thriller” T-shirt, of course, also correlates to the underground world where the Tethered walk around in a zombie-like fashion — similar to how Jackson and his dancers behaved in director John Landis’ video.

Peele himself weighed in on the Jackson nods in the film, telling Mashable, “Everything in this movie was deliberate, that is one thing I can guarantee you. Unless you didn’t like something and that was a complete accident.”

And deploying the King of Pop — himself a participant in 1986’s Hands Across America, was also intentional. “Michael Jackson is probably the patron saint of duality,” Peele said. “The movie starts in the ’80s — the duality with which I experienced him [Jackson] in that time was both as the guy that presented this outward positivity, but also the ‘Thriller’ video which scared me to death.”

Barrett agreed, adding that Jackson is “an extreme example of how you are seen and how you really are inside,” adding that his first child molestation trial really gave insight into Jackson’s complicated dual legacy. (He was acquitted in 2005 of molesting a 13-year-old boy.)

The idea for the doppelgängers’ jumpsuits originally came from utilitarian wear, “work clothes that people go out to work out every day and things that people who construct the infrastructure of society wear,” Barrett said.

Also Read: Jordan Peele's 'Us' Wins Over Critics: 'A Masterpiece' Despite Some 'Messiness'

“It kind of evolved from work wear and utilitarian clothing to also something that they can easily make,” she explained. “Jordan was like, ‘I think they should be red,’ whatever they are. We went down that pathway, and the jumpsuit was tried on a lot of people and was universally accepted. It’s such an easy thing to take on and off, basically. I just shortened the pant leg so you could see their ankles and I wanted there to be a part of them that wasn’t covered, so they were vulnerable. I wanted them to feel like they bled in and out of the light and dark, like a watercolor — they emerge from the darkness.”

She also wanted to set the doppelgängers apart from the above-ground family of Lupita Nyong’o and Winston Duke’s characters. “They were lights in the darkness because they go through such an extended kind of horrific set of events but they are always coming back together,” she said.

Barrett says she has no idea her homage to Jackson would prove so timely with the release of “Leaving Neverland” just weeks before “Us.”

“I didn’t really think about how it would be good or bad for the movie, it was just an eye-opening thing,” she said. “What really struck me was that in the last trials, the world was seeing him in a different way and you were more likely to say, ‘He could be but what if he’s not?’ or ‘There was some reason,’ whereas this, for me anyway, really shone a light on stuff that had not been out in the open.”