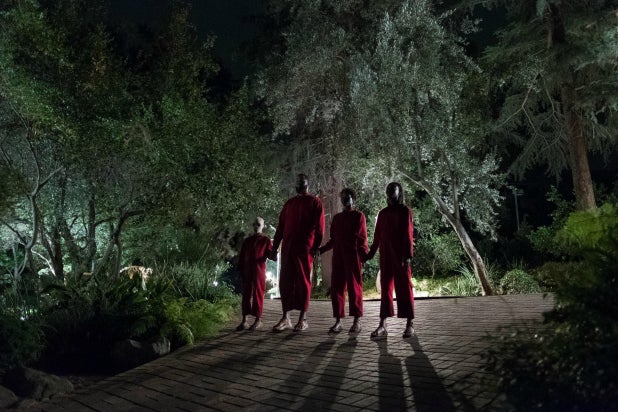 Examining the nature of humanity can be a dark and depressing venture, now more than ever. A world that feels divided, one which you fear, becomes your greatest enemy. These are the building blocks for “Us,” writer-director-producer Jordan Peele’s highly anticipated, thrilling and satisfactory follow up to his Oscar-winning 2017 debut “Get Out.” It’s also where he cements his place as one of the best horror creators of our time, knowing that life’s true horror stems from what humans are capable of doing to each other.

Adelaide Wilson (Lupita Nyong’o), her husband, Gabe (Winston Duke), and their children Zora (Shahadi Wright Joseph, “Hairspray Live!”) and Jason (Evan Alex) head to the beach town of Santa Cruz for their summer vacation. They’re an all-American family, with a father who has a degree in dad jokes, a mom who tends to the needs of all her family, a monosyllabic teenager who never looks away from her phone and a spritely, rambunctious young boy content to run around in a Chewbacca mask all day long.

But then a pattern of coincidences appear — the number 11:11 popping up several times, circles landing within a circle, words being spoken in the same moment — that shake Adelaide to her core. She’s been through this before, as a young girl, in that exact same beach town. And what she once ran from has now come to make her remember what she left behind.

The performances are uniformly fantastic, but I was most impressed by Wright Joseph and Nyong’o, both delivering distinct and completely unique work. Nyong’o gives a master class in acting in dual roles and is almost unrecognizable as her doppelgänger persona. (Which is as much plot as will be revealed here.) Not only does she take on an entirely different voice, but her posture, movements and facial expressions suggest a different individual entirely. At times, I had to remind myself that this was the same woman; that’s just how good she is.

Wright Joseph, meanwhile, plays two extremes of a teenager: one slightly removed, angsty but loving, while the other is just downright creepy. Her strengths are on full display in some of the more climactic scenes, but that evil-twin smile will haunt me in my sleep. Duke and Alex are great pairings against Nyong’o and Joseph, with Duke — the imposing M’baku of “Black Panther” — transforming himself into a full-on suburban dad. Co-stars Elisabeth Moss and Tim Heidecker, who play the Wilsons’ friends and neighbors, add a touch of humor with their own dark twist.

Duality is a big theme throughout the theme of the film, an examining of things that are so very similar in appearance but vastly different too. The film even incorporates the theme within its own structure. “Us” plays as two contrasting movies: one is very much a jump-scare-filled, thrilling horror flick that many of us grew up watching, while the other is a much deeper and complicated drama with a sometimes muddled message about society. It’s a smart strategy but also a bit disorienting.

There’s a plot hole that evolves from this very contradiction of themes, but it’s not a deal breaker, mainly because Peele envelops you in the film’s dichotomy. Ultimately, this yin and yang deepens the film, because it allows it to evolve and change in each subsequent viewing, even if it might disengage viewers at certain points.

That duality surfaces in the soundtrack created by Michael Abels (“Get Out”) that features both Luniz’s “I Got 5 On It” and the Beach Boys’ “Good Vibrations,” in scenes which would not usually come to mind for either song. The unique takes on both heighten the sense of the world Peele has created. Production designer Ruth De Jong (“Manchester by the Sea”) has crafted disparate yet parallel sets, which are highlighted along the way as the story reveals itself.

You don’t have to guess at what films may have been some of the inspiration for “Us.” Peele, taking a cue from M. Night Shyamalan, leaves the breadcrumbs right on the table for you to see. The opening sequence of the film is a wide shot of a few VHS tapes surrounding the television set where a young Adelaide (Madison Curry) is watching a news segment about 1986’s “Hands Across America” charity event. The VHS spines read: “C.H.U.D.”, a handwritten sticker of what might be a home movie, “The Goonies” and “The Right Stuff.” It’s a blink-and-you’ll-miss-it type of moment, one that is otherwise insignificant, but strains of those four films all influence “Us.”

Peele’s sophomore effort is the type of genre film that will merit re-examination every few years, and it has the potential to stand among his greatest contributions to genre filmmaking.