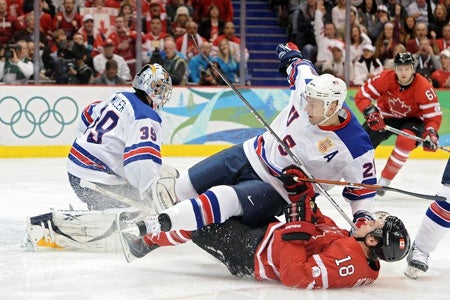 Despite record ratings, NBC has taken a barrage of critical hits over its Winter Olympics coverage – particularly the network’s decision to show many marquee events on a tape-delay in primetime, rather than live. But none were as big as the one the network took on Sunday night, when it decided to show the most anticipated event of the Games so far – the United States’ thrilling, historic upset of Canada in men’s hockey, its first since 1960  – live on MSNBC rather than NBC, where it chose to showcase the “sport” known as ice dancing.

The problem wasn’t a matter of finding the game (which I suspect will give MSNBC a relatively huge ratings boost, when they become available on Monday). It’s that unlike NBC, MSNBC isn’t widely available in hi-definition. And anyone who’s ever watched a hockey game in HD and tried to return to standard viewing can attest to the outrage.

NBC executives were not immediately available for comment late Sunday.

The backlash, though, was evident on Twitter, where “NBC” was a trending topic over “Team USA.”

Here are just a few of the hundreds of Tweets I scrolled through:

Who took a bigger hit tonight? NBC or Canadian hockey?

The only thing the USA and Canada fans agreed on was how stupid NBC is.

The incompetence astounds me! #NBCFAIL

Maybe NBC is screwing up the Olympics on purpose to make us forget about what it did to Conan. #NBCFAIL

I can’t believe @NBC put the USA/Canada hockey game on MSNBC tonight… and THEY OWN THE NHL BROADCAST RIGHTS! Who’s in charge over there?

Seriously? NBC just broke into bobsled coverage to show the end of the hockey game "live". Yeah, it ended an hour ago.

NBC going to the last minute of a hockey game that has been over for an hour! What bulls—!

How did NBC get the Olympic coverage? It’s the most dysfunctional programming ever.

NBC is just freefalling big time. Have they done anything right?

My personal favorite, though, came from actress and noted sports fan Alyssa Milano:

NBC = Nothing But Curling #olympics

Ironically, as some Tweeters pointed out, NBC owns the network broadcast rights to the National Hockey League, which makes the move even more of a head-scratcher for hockey fans.

NBC had defended its decision prior to the telecast, explaining it chose to air the game uninterrupted on cable rather than commit to a three-hour block of primetime hockey programming on the East Coast, ensuring the game will be shown live across the country. (Also, American women love ice dancing.)

But NBC committed the tape-delay sin Sunday, too. Rather than show the men’s super-combined skiing competition – in which American Bode Miller captured his first-ever gold medal – live on Sunday afternoon, the network opted to show it on tape in primetime. (What did NBC air live Sunday afternoon instead? The U.S. ratings juggernaut that is Russia-Czech Republic men’s hockey.)

The live vs. tape issue arises at virtually every Olympics, where various time zones make for tricky programming calls. (Ironically, the other stunning U.S. men’s hockey victory — the so-called “Miracle on Ice” in 1980 – was shown on tape.)

But the decision to delay live events – and not alert primetime audience to their delay — has never been more absurd in the digital age of text-messaging and Twitter.

On the NBC “Nightly News” Sunday, before its primetime Olympics coverage, Lester Holt warned viewers to look away from their TV screens if they didn’t want to see the results of Miller’s race.

The irony in all of this is that NBC is generating “American Idol”-sized ratings in spite of themselves.

That sound you hear is Dick Ebersol leading a familiar chant.

UPDATE: An average of 8.22 million were watching the game on MSNBC, or about 2.3 million more than watched the cable network on election night in 2008. Roughly three times that figure watched NBC’s Olympic coverage on Sunday night.