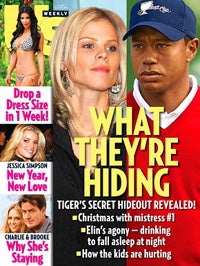 Us Weekly says it has an exclusive answer to the elusive question that’s been on the minds of all Americans since Thanksgiving: Where in the world is Tiger Woods?

We’ll let Us tell us:

"Jim reached out to Tiger," one knowledgeable source tells Us Weekly — on newsstands now — adding that Dolan invited Woods to hide out at his $13.5 million fortress-like waterfront estate — the main house of which is a 10,000-square-foot colonial mansion — on New York’s Long Island a week after his sex scandal broke. "Tiger’s been seeing a shrink who goes to Dolan’s house," says the source.

This would seem to conflict with recent reports – by TMZ and others – that Tiger is in Africa. Or Arizona. Or Palm Beach. Or at the Trump International Hotel in New York.

When Tiger does surface, it’ll be probably be on Oprah.