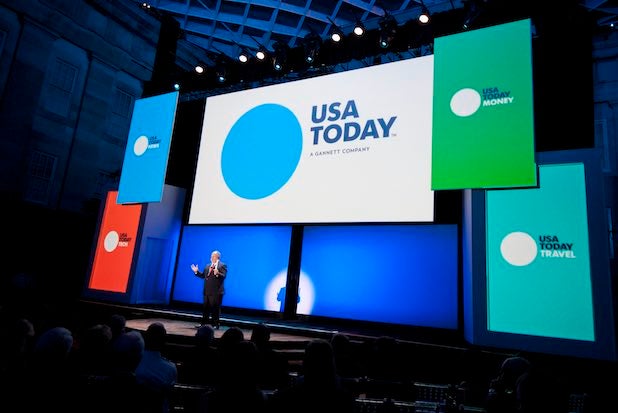 Larry Kramer, the president and publisher of USA Today, is leaving the newspaper as parent company Gannett prepares to split in two.

According to a storm of tweets from journalists at the paper and an internal memo from Bob Dickey, who will become CEO of Gannett publishing when the broadcast/digital and print businesses separate later this month, Kramer will join the board of the new publishing company.

Kramer was named publisher in 2012. Dickey said the search for Kramer’s replacement is underway.

His departure comes as the board of Gannett voted formally Monday morning to approve the split, which will create two publicly traded companies: a broadcasting and digital company named TEGNA and new Gannett, which will retain the name Gannett Co. and include its publishing properties and affiliated digital assets.

Under the terms of the transaction, Gannett shareholders will retain their shares of Gannett (which will be renamed TEGNA) and receive one share of new Gannett for every two shares of Gannett stock they own on the record date of June 22, 2015.

According to Dickey, Kramer will leave USA Today “effective at the time of the corporate split.”

“In just three weeks, we will create two industry leaders that will benefit greatly from enhanced strategic, operating, financial and regulatory flexibility as independent companies. We believe strongly that this transaction will enhance performance, unlock shareholder value and give investors access to more targeted investment opportunities with trading valuations that better reflect the distinctive characteristics and growth profiles of both companies,” she said in a statement.

Read Dickey’s memo to staff regarding Kramer’s departure below:

I want to share with you all that Larry Kramer will be joining the board of the new Gannett and will be stepping down as president and publisher — effective at the time of the corporate split.

As most of you know, Larry passionately took on the challenge of making USA TODAY a digital first news organization in May of 2012. During his three years at the helm, he has helped USA TODAY and its related brands reimagine the iconic “newspaper.” This 40-year veteran newsman and online pioneer came out of retirement to help us forge a path in a rapidly changing landscape — while keeping a keen focus on quality journalism. His personality, personal brand and joy for the industry have given us numerous contributions.

Over the last three years, our USA TODAY newsroom has proudly earned numerous journalism and product awards. During his tenure our mobile page views are up 50% and visitors are up 150%. Larry helped implement our USA TODAY Local print edition that has brought USA TODAY content to 35 Gannett local markets, as well as a growing number of non-Gannett markets, more than doubling our print circulation.

Before arriving at USA TODAY, Larry was president of CBS Digital Media. Prior to that, he founded and led MarketWatch for 12 years before selling it to Dow Jones in 2005. His journalistic roots come from his more than 20 years as a reporter and editor.

We will be conducting an extensive search for our Chief Content Officer role.

And, we will soon share details for a reception honoring Larry’s role with USA TODAY. Meanwhile, please join me in thanking him for his service and welcoming him to his new role on our board.