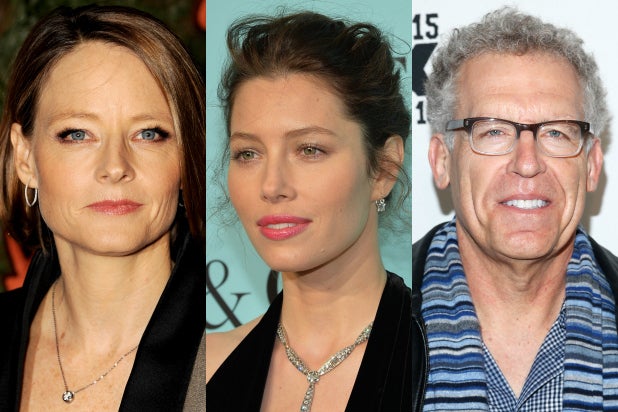 The network also ordered a cast-contingent pilot pick-up for the hour-long original drama series “Stanistan,” about Americans in a dangerous land abroad.

As previously reported, Amy Poehler has a pilot presentation with the cable network for “Difficult People,” starring Billy Eichner and Julie Klausner.

“This slate represents the next generation of originals at USA, with a focus on dramas that are more serialized, provocative and culturally resonant,” Chris McCumber, president of USA Network, said in the release. “We’re very much committed to partnering with some of the most talented creatives in the business to offer a broad mix of compelling programming for our viewers.”

Here is the new slate, as described by USA:

Drama Development
“Boom”
A young couple moves to a contemporary boomtown in North Dakota in pursuit of the American dream and are seduced by the sudden wealth of frontier life. Writer-director Josh Pate (“Surface”) co-wrote the project with author Rodes Fishburne (“Going to See the Elephant”) and executive produces with Tony Krantz (“24”). “Boom” is from ABC Signature.

“Brand”
Executive produced by Jodie Foster (“Elysium”), Bob Cooper and Tyler Mitchell’s Landscape Entertainment and writer Bill Wheeler, “Brand” follows a charismatic man who found his way out of addiction and lawlessness when he was born again into the Christian faith of his youth, joining his brother ministering a small, local church. Consumed with reaching the unsaved “by any means necessary,” his obsession grows when confronted by a brand new mega church poised to crush his ministry. The series is from FremantleMedia North America in association with Landscape Entertainment. Foster is signed on to direct the pilot. J.J. Jamieson (“The Wives He Forgot”) also executive produces.

“Colony”
In 2015, Los Angeles exists in a state of occupation. Some collaborate with the alien authorities and benefit from the new order, while others rebel and suffer the consequences. “Colony” is a naturalistic drama about a family torn by those opposing forces, making difficult choices as they balance keeping their family together with the struggle of the human race. A co-production between Legendary Television and Universal Cable Productions, “Colony” was written and is executive produced by Carlton Cuse (“Lost,” “Bates Motel”) and Ryan Condal (“The Sixth Gun”).

“The Farm”
On one of the last great family-owned farms in the Midwest, a father must battle horrors both psychological and diabolical in an effort to save those closest to him from a long-buried evil that has taken control of his only daughter. From writer and executive producer Brandon Camp (“Dragonfly”) and executive producers Dawn Olmstead (“Prison Break”), Michael Bay (“Transformers” films), Andrew Form (upcoming “The Last Ship”) and Brad Fuller (upcoming “The Last Ship”), “The Farm” is produced by Grady Girl Productions and Platinum Dunes in association with Warner Horizon Television.

“Control”
The series explores the high-intensity and contentious world of air traffic control in one of America’s busiest airports. “Control” centers on a charismatic, foul-mouthed optimist who has just ascended to the ranks of manager in an environment where union vs. management is a constant, near-violent struggle. From writer and executive producer Rashad Raisani (“Burn Notice”) and executive producers Larry Shuman (“Devious Maids”) and David Wolthoff. The series is from Fox Television Studios and based on the book Hidden America, by Jeanne Marie Laskas.

“Mr. Robot”
“Mr. Robot” is a drama about a young programmer, Elliot, who suffers from a debilitating anti-social disorder. He decides that he can only connect to people by hacking them. He wields his skills as a weapon to protect those he cares about from those who are trying to hurt them. Elliot will find himself in the intersection between a cybersecurity firm he works for, his alter ego hacking exploits at night, and the underworld hacking organization trying to recruit him to help bring down the one percent. From writer and executive producer Sam Esmail (“Comet”) and Steve Golin (“True Detective”) and Chad Hamilton (“Breakup at a Wedding”) from Anonymous Content, “Mr. Robot” is from Universal Cable Productions.

Limited Series
“Border Lord”
From executive producers Greg Nava (“Selena”) and Gil Netter (“Life of Pi”), “Border Lord” is the origin story of the Mexican drug cartels and how they derived from one family in San Diego. In order to protect his business from law enforcement, a patriarch splits his organization among his extended family…but money trumps blood relations as greed and hubris destroys the once tight-knit family. Barbara Martinez-Jitner (“Bordertown”) serves as executive producer and will write along with Nava. The project is from Universal Cable Productions.

“The Swap”
Struggling to save her marriage, a woman convinces her workaholic husband to ‘swap homes’ with another couple so they can take their family on a much needed dream vacation to the Cook Islands. Their dream quickly turns into a nightmare that includes a murder investigation, a kidnapping gone wrong and an international corporation on the verge of collapse. “The Swap” is written and executive produced by Josh Berman (“Bones”). Jill Green (“The American”) and Acorn Productions also serve as executive producers. “The Swap” is from Sony Pictures Television.

Comedy Development
“Difficult People” (Pilot Presentation)
“Difficult People” is from the comedic minds of Julie Klausner (“Mulaney,” “Billy on the Street”) and Billy Eichner (“Billy on the Street,” “Parks and Recreation”) who star as best friends living in NYC. Klausner and Eichner play pop culture loving best friends who hate everyone – except each other. Klausner is writing the pilot presentation and Andrew Fleming (“Hamlet 2”) will direct. Amy Poehler (“Parks and Recreation”) is an executive producer along with Dave Becky of 3 Arts Entertainment and Michele Armour of Marobru (“Chappelle’s Show”). “Difficult People” is from Universal Cable Productions.

“Love the One You’re With”
“Love The One You’re With” is a modern day love story about a free-spirited woman who reluctantly falls in love with a Type A man 14 years her junior. Karen McCullah (“Legally Blonde”) is writing the pilot script and executive producing along with David Janollari. The comedy is from Universal Television and David Janollari Entertainment.

“Moguls”
“Moguls” is a single camera comedy about the employees of a popular Colorado ski resort. The series centers on a young man who thinks he’s in charge and the woman from corporate who knows she is. From writers Geoff Moore (“Better Living Through Chemistry”) and David Posamentier (“Better Living Through Chemistry”) and executive producers Jessica Biel and Michelle Purple of Iron Ocean Films. Universal Cable Productions will produce.

“Royal”
From the writer of “Gran Torino” (Nick Schenk), “Royal” is a fresh spin on family comedy. The title character is a recently defected Hells Angel who has moved to the suburbs to care for his deceased sister’s children, but the transition between the two worlds proves to be very difficult for him. Sony Pictures Television is producing with executive producers Schenk, Peter Tolan (“Rescue Me”), Michael Wimer (“Rake”) and Guymon Casady (Game of Thrones) at Television 360.