I know that some of you are still filling out your ballots, which don’t have to be back to PricewaterhouseCoopers until Saturday afternoon. (Here’s the press release to remind you.)

And I’ve been hearing that the Best Picture ballots, with those 10 lines just begging to be filled in, are proving to be troublesome for more than a few of you Oscar voters.

I realize that 10 is a lot of movies to list, especially if you haven’t been diligent about seeing everything. And I know that people have lots of questions about whether you really even need to fill in all 10 lines. 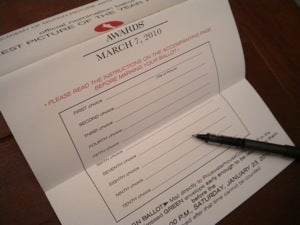 After all, with the preferential system of counting votes, your first couple of choices are the only ones that really count, right?

Since pundits and publicists and other interested parties are pretty much just guessing how the system will play out with double the number of Best Picture nominees, I decided to try a test. So I took the Top 10 lists compiled on the Movie City News website, well over 100 of them, and I treated them like Oscar ballots.

Note: I used the Top 10 lists that are included on the site’s “List of Lists” pages – which, when you leave off the critics who don’t rank their choices (sorry, Roger Ebert), number just over 120. Several dozen more lists are now incorporated into a chart on a different MCN page, but without an easy way to view those lists, it would have been too time-consuming to add them to the mix.

I put the lists in stacks, I moved them around, I eliminated the weakest competitors and redistributed the ballots, all in keeping with the complicated rules for preferential tallying.

I ended up with a slate of 10 Best Picture nominees (yes, “Avatar” was on it), and then I looked back at the ballots to see how the count had played out.

Bear in mind that under the preferential system, you list multiple films but you’re really just casting a single vote for a single film. (And if “A Single Man” is the single film that gets your single vote … well, it’s enough to make your head spin.)

If your number-one choice needs your vote, that’s where it goes. If your top choice is eliminated for not having enough support, or conversely if it has so many votes that it doesn’t need yours, then the rest of your ballot comes into play.

And here’s the deal with my count: in two-thirds of the cases, 81 out of 122 ballots, all or part of the vote went to the critic’s first choice. But second, third and fifth choices also counted fairly often (rarely fourth choices, though there’s no good reason for that), and a dozen voters actually helped out candidates with their sixth, seventh, eighth and ninth choices.

Richard Roeper, for instance, unknowingly cast his vote for “Fantastic Mr. Fox,” which was listed seventh on his ballot. Eric Kohn of indieWIRE did the same for “A Serious Man,” which he’d put in his eighth slot.

Kohn’s case was a typical example of how lower-ranked films can come into play. He’d put “Sita Sings the Blues” in his number-one position – but since he was the only one to do so, that film was eliminated at the beginning of the second round of tallying. His number two and three choices, “Two Lovers” and “The Girlfriend Experience,” hadn’t gotten any number one votes and thus were never in the running to begin with. His fourth-ranked film, “The Hurt Locker,” got more than enough votes in the first round to immediately secure a nomination, so it no longer needed his vote. Finally, down in the number eight slot, was a film that was still in the hunt, and one that subsequently used his vote to help win a nomination.

Which means that while your number-one choice is by far the most important, the top five all have a good chance of coming into play.  And, sad to say, you shouldn’t ignore that second five, either.

Because you just never know.

For the record, here’s what the critics’ slate of Best Picture nominees would look like, based on my tally:

One more thing: diligent readers may have caught the odd phrase “all or part of the vote” a couple paragraphs earlier. That’s because of the so-called surplus rule, which kicks in when a film gets significantly more votes than it needs to secure a nomination.

If, let’s say, a movie gets twice as many votes as it needs, the unneeded 50 percent of each of its votes will be allocated to another film on that voter’s ballot. The percentage varies depending on how big the surplus is.

But with 10 best-pic nominations up for grabs, the threshold for securing a nomination is so low (slightly more than 500 votes from the 5,777 voters) that at least two or three films seem likely to go into surplus immediately.  So if you put “Avatar” or “The Hurt Locker” in the number-one spot, your job is certainly not finished: chances are you’re going to end up giving part of your vote to something else on the ballot, too.

So come on, fill out all those lines. There’s no telling who’s going to need your vote.