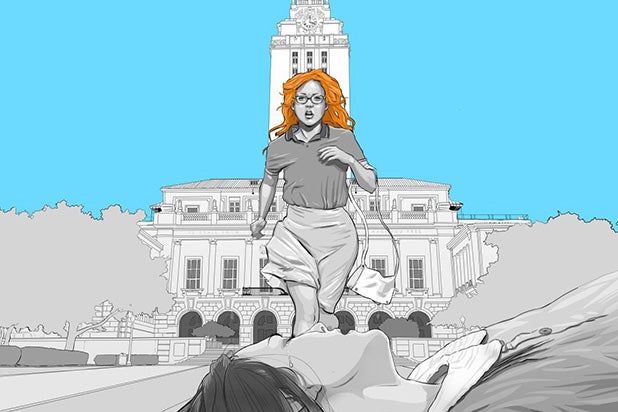 James praised director Keith Maitland for his commitment to telling the survivors’ stories honestly and accurately, but “I wish he had gotten my dress right,” she said jokingly.

The film, inspired by a story about the shooting that appeared in Texas Monthly, titled “96 Minutes,” combines animation and interviews with survivors to re-create the events of that day. But despite his thorough research, Maitland said his budget and time constraints meant he couldn’t get every detail right.

“We spoke for hours about the dress,” Maitland said. “But we could not find a dress that matched it. And when I hired an art department person to recreate the dress, and sent her a picture, she did not approve the dress. So we settled for a dress that I thought we were both comfortable with.”

“It was a beautiful film, so I can let go of the dress thing. It’s okay,” James said.

Maitland described his process of creating the documentary, explaining that he approached it like a traditional film. After completing interviews with his subjects, he turned their words into a screenplay. Archival footage was used where appropriate and the missing pieces were filled in using live-action re-creations transformed into rotoscope-style animations.

Though animation might not seem like the most obvious method for re-creating a tragedy, Matiland’s commitment to telling the survivors’ stories that made James feel comfortable with the use of animation.

“The important thing is that Keith, he just loved us and we had a trust in him,” James said. “So it never occurred to me to question the methods.”

As for why the animation couldn’t be altered to nail the details of the dress, Maitland said it came down to time and budget.

“And to this day, I still can’t picture the dress that Claire has described to me … The couple of times we tried, we did not receive approval from that portion of the art department,” he said, looking at James.

See how the Netflix documentary impacted the lives of Avery, Dassey, their families and their legal teams

"Making a Murderer" chronicled the murder of Teresa Halbach and the subsequent trials of suspects Brendan Dassey and Steven Avery.