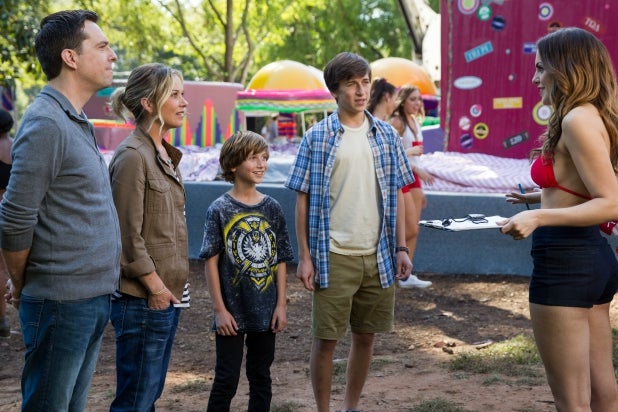 The new reboot/sequel “Vacation” is all too true to the experience of taking a long family trip: there are a few special moments you’ll remember and talk about later, but for the most part, it’s a featureless, repetitive voyage that can’t be over soon enough.

Given its pedigree — writer-directors John Francis Daley and Jonathan M. Goldstein previously perpetrated the screenplays of “The Incredible Burt Wonderstone” and both “Horrible Bosses” — “Vacation” does occasionally spring to life, delivering the kind of ouch-inducing humor of personal humiliation and bad luck that we’ve come to know from the ongoing adventures of the Griswold family. But while those laughs are welcome, there aren’t quite enough of them to sustain the experience.

Ed Helms stars as a grown-up Rusty Griswold, who works as a pilot for a bargain-basement commuter airline that connects Chicago to far-off destinations like South Bend, Indiana. (It’s never mentioned that in his childhood photos, he alternately looks like Anthony Michael Hall, Jason Lively and Johnny Galecki, from previous “Vacation” installments.) Feeling distanced from wife Debbie (Christina Applegate) and sons James (Skyler Gisondo, “Night at the Museum: Secret of the Tomb”) and Kevin (Steele Stebbins, “A Haunted House 2”), Rusty decides to pack the brood into a rented Albanian mini-van and schlep them cross-country to Wally World, site of his never-forgotten teenage vacation.

He might never have forgotten the theme park part, but clearly Rusty has mentally blocked the string of horrors and abasements to which his family was subjected back in the day, because he stumbles wide-eyed into a new set of them, from a “Duel”-inspired trucker who seems to be in deadly pursuit to mistaking a sewage treatment area for a natural hot spring.

It’s a delicate balance to ask audiences to get invested in characters and also to enjoy their suffering, and while many comedies have excelled at this sleight of hand, Daley and Goldstein, in their first outing as feature directors, don’t quite have the skill yet. Sometimes it works — the family visits Debbie’s old sorority house, where surprising secrets about her past clash with her current mom identity — but more often than not, the gags are either too dopey, too predictable or too cringe-inducing to be genuinely funny.

A game cast, Helms and Applegate in particular, often makes this material more successful than it has any right to be, and the directors wisely pepper the film with comedic cameos which won’t be spoiled here. It’s no surprise that a little goes a long way: Brief scenes involving a guided rafting trip through the Grand Canyon or hijinks at the Four Corners Monument play much better than a protracted, one-joke visit to Rusty’s sister Audrey (Leslie Mann) and her swaggering weatherman husband Stone (Chris Hemsworth) in Texas.

“Vacation” wisely doesn’t try to repeat the “Park’s closed, the moose out front shoulda told ya” climax of the original, but it doesn’t replace it with anything comparably memorable. By the time the Griswolds wrap up this trip, you’ll feel like you’ve been subjected to someone else’s slide show, one that definitely featured some memorable moments, but not enough to justify all that couch time.