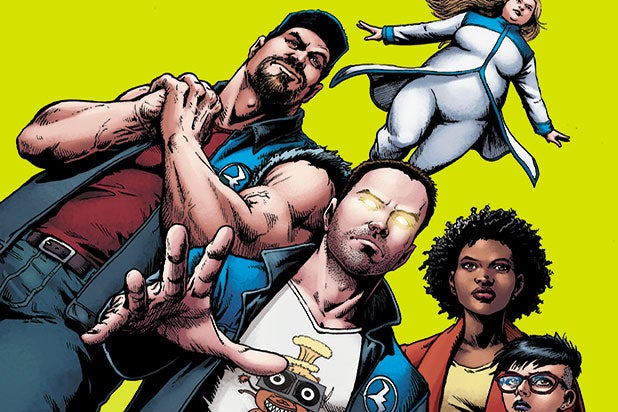 Sony is moving forward on its five-film plan for joint film franchises based on the Valiant comic books “Harbinger” and “Bloodshot,” which are then set to culminate in a “Harbinger Wars” crossover event film, TheWrap has learned.

Within the last month, Sony has preemptively renewed its option on “Harbinger” — a comic following a teenage runaway Peter Stanchek with massive telekinetic powers — for a sum in the high six figures and is moving to package the pictures quickly.

The previously announced “Bloodshot” — about a mortally wounded soldier resurrected with cutting-edge nanotechnology and charged with rounding up “harbingers” like Stanchek — is now seen as the second film in the series.

The character would be introduced as the villain in franchise kickoff “Harbinger,” an individual with knowledge of the project said, with “Bloodshot” following a year later.

Sony has not responded to TheWrap’s request for comment.

The plot for the “Harbinger” screenplay by writer Eric Heisserer (“Arrival, “Lights Out”) is being kept under wraps but it’s believed to follow Valiant’s 2012 volume of the “Bloodshot” series.

Additionally, the move to bump “Harbinger” up in the release order is giving Sony ample opportunity to develop and position additional spin-offs from the “Harbinger” and “Bloodshot” universes.

Attention is now being given to multiple characters from the comics, including the HARD Corps, Livewire, Generation Zero, and, most notably, Faith, who generated a ton of worldwide media attention in the comics space this year and features prominently in the Harbinger script.

Neal Moritz will produce through his Original Film banner with Dinesh Shamdasani on behalf of Valiant Entertainment.

Valiant’s library is truly one of the great and as-yet untapped wells of intellectual property anywhere in Hollywood. The publisher’s bench of more than 2,000 superhero characters (with lifetime sales of more than 80 million copies) makes it the third largest library of superheroes behind Marvel and DC — and the only one not currently owned by major conglomerate.

And unlike its rivals, Valiant has fostered a long and well-earned reputation in the comics world for producing quality storytelling that transcends the norms of the superhero genre. Case in point: This summer, Valiant earned an unprecedented 50 nominations at the Harvey Awards, one of the industry’s highest honors.

“Harbinger,” in particular, is rife with potential for a more grounded and modern take on the genre. In the comic, created by former Marvel Editor-in-Chief Jim Shooter and legendary comics artist David Lapham, Stanchek is recruited by fellow psychic Toyo Harada — a philanthropic billionaire who using his wealth to secretly finance an underground organization called the Harbinger Foundation to manipulate world affairs.