As “The Twilight Saga: New Moon” descends upon the multiplexes, it would be so easy, cheap and déclassé to unload on the whole phenomenon. Like Edward, the chaste vampire star of the movies and the books, I should resist the temptation.

Oh wait. I’m not Edward. And I’d like to talk about our disturbing attraction to fascism. 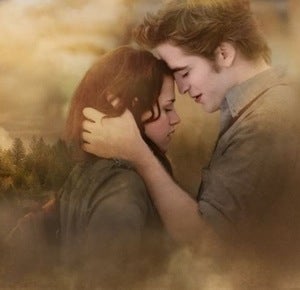 Understanding Twilightmania requires that we understand the raging intensity of heart and hormones during the teen and tween years. We should also appreciate its Bollywoodesque code of sexual restraint: Edward is love with Bella, a non-vampire. He suppresses his desire to dentally mainline her blood supply because he loves her.

The idea seems to be that it takes one J.C. of a man (must be physically gorgeous, as a metaphor for his inner beauty) to rein in his animal side — the elephant in the room in so many relationships. Edward amounts to a celestial Ben Hur of his sex drive, keeping those Arabian steeds in picturesque lock step.

Not having sex is so much sexier than having it. Suppression is the new black. A fascism over the libido. If there was a Latin term, it might be anorexia schtuppia.

But here’s another take: The success of the original movie (based on Stephenie Meyer’s wildly successful book series) and the excitement over “Full Moon” is really about our unfathomably stupid desire to join two of the most enslaved, tyrannical worlds in which anyone could find themselves: high school and the world of vampires.

Forget the freedoms our forefathers fought for. We can’t wait to gird the orange prison suits and leg irons of slave membership.

Yes, both movies make it all seem so attractive to be part of this sub-world of vampires and werewolves — or Team Edward and Team Jacob. Both tribes boast a cast of fetching, ripped, youthful players, including Taylor Lautner, a werewolf who becomes a romantic contender in the new movie. But to vicariously join this group is to assume immediate second-class membership, unless we happen to be gorgeous.

Robert Pattinson and Kristen Stewart — Edward and Bella — represent that beautiful couple we remember from our own high-school years. Remember them? The Golden Two. The ones we watched — jealously and resentfully — from our lonely corners in the food hall, as they smooched and canoodled over their chocolate milk.

They slurped tongues and lips, we slurped Jell-O. We were so second class. Take a look again. Stewart and Pattinson? Ridiculously hot. Elite hot. Above us. Not. Us.

How good do we feel? Why are we drawn to Edward and Bella, even though they act like the outsiders many of us have felt like? Why do we want in? When does our fun start?

Join either of these teams and, hello, relinquish yourself. You are a slave to your need to feed. You must be forever connected to your fellow hunters. There is no more individualism. You are there for unlife. Feel like going off on your own, American style? No, sir. No individualism here. You’ll have to stick with your fanged, socialistic pals.

Speaking of socialism, and our innate propensity to sign up for fascist membership, the 20th anniversary of the fall of the Berlin Wall is upon us. And this seems the right time to ponder a connecting cultural puzzler: Why are we embracing the very tyrannies the former East Germany was built around?

I speak of our whole Facebook culture in which nothing is too banal, insignificant and personal that we can’t share it with the world. Why do we choose to share with the world the sex we had with our boyfriend Kevin on Dad’s favorite golf course at midnight? Why do we sext our friends? Why does it not freak us out that everyone, including Dad, can check out those pictures forever?

Do we think we can opt for some version of the Witness Relocation program if we post a little too much? The jackbooted goons of the former East Germany would have paid billions for that kind of transparency. Who would need Stasi — their secret police, which constitute a significant part of the population during the Cold War — when the citizens are doing such a fine job of ratting on themselves?

The disconcerting conclusion is that we are eager to join societies that would make slaves of us. Maybe we have too much freedom. Maybe we create the invisible states of Textopia and Vampiria out of sheer boredom. Or maybe the “Twilight” movies and books are just fun.

Whatever the reason, it’s at least instructive to ask ourselves, as often as possible, if privacy and individualism are still part of the equation when we speak of freedom.