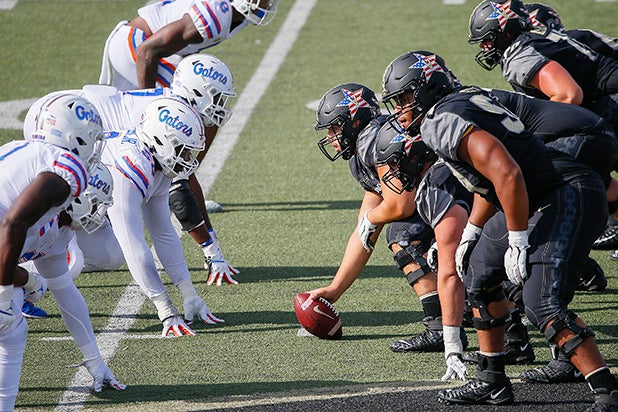 Vanderbilt Commodores kicker Sarah Fuller has made history once again as the first woman to score a point in a Power Five football game on Saturday in the team’s matchup against the Tennessee Volunteers.

Fuller scored the point toward the end of the first quarter after a touchdown pass from teammate Ken Seals to wide receiver Cam Johnson. According to ESPN, “one of the game officials handed her the ball she kicked as she returned to the sideline and was heartily congratulated by coaches and teammates.”

Watch video of the kick, via ESPN’s “SportsCenter,” below.

Fuller first made history two weeks ago as the first woman to play in a Power Five game. She followed in the footsteps of two other women — Katie Hnida of New Mexico in 2003 and April Goss of Kent State in 2015 — though neither played in a major conference. She is one of three kickers currently on Vanderbilt’s roster, alongside Pierson Cooke and Wes Farley.

Fuller, who is a senior goalkeeper on Vanderbilt’s SEC championship soccer team, joined the Commodores’ game against the University of Missouri Tigers on Nov. 28 by delivering the opening kickoff of the second half. Though the Commodores lost the game 41-0, Fuller recently helped lead their women’s soccer team to its first SEC title since 1994.

“I just want to tell all the girls out there that you can do anything you set your mind to; you really can. And if you have that mentality all the way through, you can do big things,” Fuller said in an interview after her first game.

Sarah Fuller just became the first woman to score in a Power 5 game.