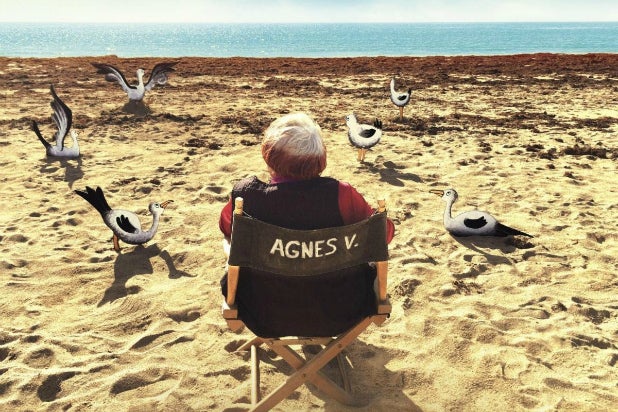 In the latter years of her filmmaking career, Agnès Varda — a giant of the French New Wave of the 1960s — integrated herself more and more into her work, becoming a central character in acclaimed documentaries like “The Gleaners and I” and “Faces Places,” not to mention the autobiographical “The Beaches of Agnès,” which she made to mark her 80th birthday.

As someone accustomed to telling the story of her life on film, it’s not surprising that she ended her career by creating her own memorial: “Varda by Agnès” premiered at the 2019 Berlinale, just one month before she died at the age of 90. This final film acts as a perfect button to a legendary life in art, and it’s also a launchpad to viewers who want to go back and explore her groundbreaking contributions to the cinema.

Structurally, “Varda by Agnès” is built upon a series of lectures she gave, showing clips from her work and occasionally bringing out collaborators like “Vagabond” star Sandrine Bonnaire — she and Varda have a conversation under umbrellas in the middle of one of the film’s rural fields — or cinematographer Nurith Aviv, who shot several of Varda’s 1970s documentaries.

Also Read: Agnès Varda Appreciation: She Had Endless Curiosity About People and Filmmaking, And It Shows

But the film is edited so masterfully by Varda and Nicolas Longinotti that it never feels stagebound; we’re constantly being whisked away to one of her narrative features, or learning the inspiration behind various documentaries, or suddenly finding ourselves in Los Angeles, where she made several films (including “Murs Murs” and a documentary about the Black Panthers). We also get to witness the creation of some of the many gallery installations that Varda created in the latter portion of her career.

It’s her work creating multi-media installations that will no doubt be a revelation to many; if you weren’t lucky enough to be in a city with a museum that brought in Varda’s artwork – including a “cabane du cinéma,” a steel framework of a house where the walls and roof were made of strips of 35mm film from one of her features – this film offers a fascinating glimpse at various larger pieces she created.

We also get a look at her photography, another facet of her talent that directly and indirectly plays a key role throughout her life; she seems as proud and interested of her shots of neighbors and passersby on the street as she is of her portraits of Le Corbusier and Fidel Castro.

This is by no means a dry recitation of “and then I made this,” since Varda leaps back and forth in time, reminded of an older movie by one of her more recent ones, and vice versa. Anyone who has seen her recent films knows that she is a fascinating presence on camera, warm and funny, insightful and perceptive.

And, true to the discussions in her film “One Sings, the Other Doesn’t,” about the added domestic labor expected of working women, here she only glancingly mentions her husband, fellow filmmaking legend Jacques Demy, or their children, usually only when they were directly involved in her work. They are important in her life, to be sure, but this film is about her life in art. She does discuss making the biographical “Jacquot” while Demy was dying, but doesn’t talk about her Herculean efforts toward the preservation and restoration of his filmography, as well as her own.

“Varda by Agnès” makes a fascinating roadmap to a life and to a career in art, offering inspiration both for viewers and for fellow creators. And if it also prompts more directors over the age of 80 to write their own cinematic eulogies, so much the better.