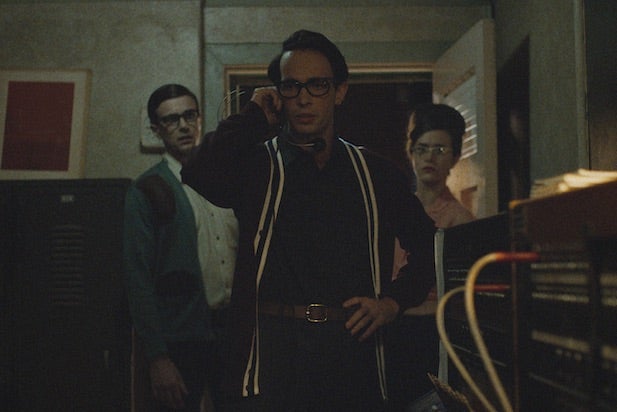 Andrew Patterson’s retro sci-fi thriller “The Vast of Night” has the look and feel of a restored 1950s Cadillac. There are certain aspects that appear new, but your first impression of the car is of its original time and era, a place that seems both modern yet quaintly of the past. From the moment the opening shot closes in on an old TV set playing an episode of “Paradox Theater,” a riff on old “Twilight Zone” and “The Outer Limits” shows, we’re placed in the front seat of a story that feels both old and new, familiar yet different.

Once the camera bypasses the old faded black-and-white TV set, it fades in on an evening in the small town of Cayuga, New Mexico. Everett (Jake Horowitz), a smooth-talking radio DJ, arrives at a busy basketball game where most of the locals are gathering. He’s joined by Fay (Sierra McCormick), a fast-talking high schooler with her first tape recorder, on their way out from the game to their lonely work duties.

As they settle in for their shifts — Everett back at the radio station and Fay taking over the switchboard from her mom — a strange, unrecognizable sound interrupts their night, throwing them into a mystery beyond their imagination.

“The Vast of Night” uses the simple ingredients of two characters, extraterrestrial intrigue and a small-town period setting to create a gripping adventure without excessive CGI or an overloaded plot. James Montague and Craig W. Sanger’s story is direct and to-the-point, delicately drawing out the mystery and creating a wonderful rapport between Everett and Fay, who alternately rely on or annoy each other.

The movie, which goes to Amazon Prime on May 29 in lieu of a theatrical opening, switches gears between fast-paced missions and slow, thoughtful conversations that fuel the mystery — it’s almost like a radio play that makes our ears strain for the next detail. There are even a few moments where the screen goes dark so to re-create the sensation of listening to an old radio drama, leaving the audience hanging on to every word.

Complemented by the eerie work of sound designers Johnny Marshall and David Rosenblad and music by Erick Alexander and Jared Bulmer, “The Vast of Night” sells its mystery as a package deal, firing on all sight-and-sound cylinders to immerse its viewers in its story.

Patterson’s direction effectively uses camera movement, as in the opening close-up that moves from the scrabbly TV screen to the buzzing night of the first basketball game of the season. In the film’s most astonishing moment, Patterson and cinematographer Miguel Ioann Littin Menz let the camera roam in one seamless shot through the streets of Cayuga, from Fay’s switchboard past darkened storefronts, into the packed parking lot outside the school and through the raucous game itself, then out a window and onto a phone on Everett’s desk at the radio station.

Littin Menz’s work avoids the sepia-tinged Instagram filter-like look of recent period fare by using a range of colors and on-set lighting. We travel from the warmth of the crowded gymnasium, which looks like it borrowed a Norman Rockwell-like color palette, to the blues of the street lights that almost look like little flying saucers, to inky, darker hues of the radio booth and switchboard room.

That attention to detail also extends to the production design by Adam Dietrich, who brings this small town to life down to the old recording equipment that plays a vital role in the film, and the costumes by Jamie Reed, who brought the cast Buddy Holly-style and Cateye glasses, varsity jackets and billowing knee-length skirts.

The lead actors, Horowitz and McCormick, share a charming chemistry and bring their characters — a too-cool local celebrity and a plucky schoolgirl — to life with natural ease. Their roles could have been reduced to campy B-movies characters, but that’s not the route this movie takes.

Beyond its vintage sci-fi trappings, “The Vast of Night” also digs into the fears and worries of people of that time, whether about a Soviet invasion or the cost of leaving home. One of the finer period details hinges on the fact that people from marginalized groups are the ones least listened to, and in a movie that’s all about listening, their voices end up being surprisingly crucial and poignant.

So while the movie is bookended like a TV show of the past, it’s still very much about our present and future as well as our timeless insecurities surrounding life and relationships.