Jinkies! Brainy Scooby Gang member Velma is finally allowed to be gay in the new Warner Bros. Animated movie “Trick or Treat Scooby-Doo!” Some fans couldn’t be happier after James Gunn‘s attempt 20 years ago was shot down.

Clips from the upcoming movie, which hit digital on Tuesday, show Velma, voiced by Kate Micucci, swooning over costume designer Coco Diablo (Myrna Velasco of “DC Super Hero Girls”) — her glasses steam up — and getting an enormous, goofy grin when Coco touches her shoulder.

James Gunn, who wrote the early 2000s’ live-action “Scooby-Doo” movies, which starred Linda Cardellini as Velma, tweeted in 2020 that he tried to make the character “explicitly gay,” but the studio wouldn’t go for it at the time. “In 2001 Velma was explicitly gay in my initial script,” he wrote. “But the studio just kept watering it down & watering it down, becoming ambiguous (the version shot), then nothing (the released version) & finally having a boyfriend (the sequel).”

He also said that scenes were shot where Velma “serenades” and kisses Daphne (Sarah Michelle Gellar), but they didn’t make the final cut.

Also in 2020,  Tony Cervone, the supervising producer on the “Mystery Incorporated” series, shared an Instagram post in which he wrote: “I’ve said this before, but Velma in ‘Mystery Incorporated’ is not bi. She’s gay. We always planned on Velma acting a little off and out of character when she was dating Shaggy because that relationship was wrong for her and she had unspoken difficulty with the why.”

Velma even had a love interest, Cervone explained: “I don’t think Marcie and Velma had time to act on their feelings during the main timeline, but post reset, they are a couple. You can not like it, but this was our intention.” 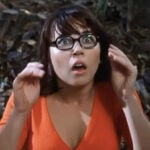