On paper, “Velma” sounds like a great idea: Mindy Kaling reimagines the iconic Scooby Gang member for a new century in a pre-Mystery Inc. prequel, making her a character of color, leaning into the long-held speculation about her sexuality, ditching the dog. For the new HBO Max animated series — adult-oriented in the Harley Quinn vein — Kaling re-teams with Charlie Grandy, her longtime co-collaborator on “The Mindy Project” and elsewhere, and the pair have a solid history of delivering enjoyable comedy to the small screen.

So you have to wonder, in the development of “Velma,” where did everything go so horribly wrong? To be crystal (cove) clear, it’s definitely not in the introduction of racial diversity to the formerly all-white cast – not just Velma but also Daphne (Constance Wu) as Asian, Norbert (Sam Richardson) as Black – or the reveal that Velma’s longings for a female classmate may go past friendship. It’s the other stuff: the pointless nudity, the gratuitous violence and gore, and plot points that spin like a top to go absolutely nowhere.

As the very first scene indicates, Velma intends to be much scarier, bloodier, and edgier than its source material right out of the gate. Things kick off not just with a murdered high school girl, but with her brain cut out of her oozing corpse by a next-level serial killer. Velma is already investigating the disappearance of her mother years ago, and any attempts to probe into the new mystery inspire hallucinations likely intended to symbolize anxiety but in a truly disturbing manner (Velma’s mother morphing into a harpy from hell, aggressive vines piercing under Velma’s skin and into her eyes, etc.) 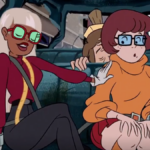 Although Velma’s classmates meta-reference prior pop-culture efforts – Daphne muses in that first episode, “Have you ever noticed how pilot episodes of TV shows always have more sex and nudity than the rest of the series?” while in a locker room shower, surrounded by her naked friends – these frequent observations are less like subtle winks and more like painful slaps upside the head. The horror scenes combined with the (animated, but still) nudity – like a conversation Mindy and her dad eventually have in a combo diner/strip club – make this series definitely out-of-the-running for the grade-school set. So you have to wonder, who in fact is Velma intended for?

An easy answer may be that it’s a nostalgic yet reimagined look for those who grew up with the Scoobs in any incarnation. There are plenty of fun callbacks to the Scooby canon: Fred (Glenn Howerton)’s family fortune stems from their company Jones Gentlemen’s Accessories – with the primary product being an ascot, naturally. Shaggy still goes by his given name, Norville, and has yet to discover the never-named weed that ended up defining his character in the original series – although he is on YouTube pushing precursors to the Scooby Snack. Sharp-eyed/eared viewers can spot the notes from the original series’ chase scene score, or glimpses of other classic Saturday morning cartoon favorites, from Captain Caveman to The Jetsons. There’s even a pointed reference to the closest thing the original Velma had to a catchphrase –  “Jinkies!” – as well as a cue to the legendary cartoon dog himself.

But a string of nostalgic nods are not enough to build an entire series on. A lot of the disharmony stems from the main character the series revolves around: As with other Kaling protagonists (Mindy in “The Mindy Project,” Devi from “Never Have I Ever”), Velma is almost entirely self-absorbed. But she lacks the charm of those previous leads, so it’s difficult to fathom why several of the main characters become romantically interested in her, especially when she repeatedly blows them off in favor of her own priorities. Classic Velma was always a know-it-all, to be sure, but she was our know-it-all, and would never let her friends hang out to dry the way this one does. Meanwhile, too many random plot points spark briefly and soon fizzle out, as when Daphne and Velma try to raise money by dealing drugs to the local teens in the now run-down town of Crystal Cove, or when Velma inexplicably has to make a list of the hottest girls in her high school, hardly a solid structure to build an entire episode around.

As the overarching mysteries of the serial killer/Velma’s mom’s disappearance pick up across several episodes, the idiotic plot turns fortunately fall by the wayside in favor of what could be a compelling mystery, even tossing in some fun throwbacks to campy 1950s horror films. Unfortunately, the viewer has to wade through many painfully unfunny one-liners and unappealing characters (like Mindy’s materialistic stepmom, Daphne’s mean girl pals) to get there.

The “Scooby Doo! Mystery Incorporated” series from about a decade ago had an inspired take on the Scooby genre: poking fun at Fred and his love of traps, adding references to pop-culture players like H.P. Lovecraft and Andy Warhol that adults could appreciate, while kids still revered the fab five that have been popular practically since their debut in 1969. But “Velma” gets bogged down by trying to tackle too much, from the heavy-handed meta references to dismissing the psychological causes behind Velma’s potentially fatal (!) hallucinations as “a bit muddy.”

Still, the solid Scooby-Doo fan base might have managed to forgive this latest incarnation – especially with an impressive voice cast that includes everyone from Wanda Sykes to Jane Lynch to “Weird Al” Yankovic – if it was actually enjoyable to witness as opposed to a dark and plodding tale. Instead, there’s a lurking sense of dread that hovers over the whole thing – and not the good kind. Velma’s biggest crime? Not being funny – or fun – enough.

The first two episodes of “Velma” are streaming now on HBO Max, with new episodes streaming weekly on Thursdays.