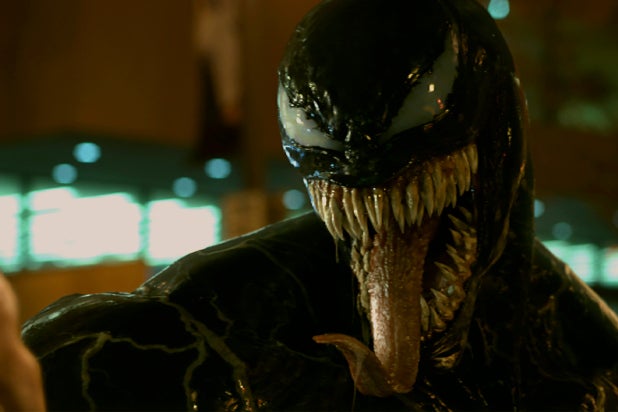 October continues to be very good for Sony Pictures as “Venom” stays atop the box office charts with a strong $35 million second weekend. Combined with the $16 million opening for “Goosebumps 2: Haunted Halloween,” that’s enough to push the studio’s total annual domestic gross past $1 billion for a second straight year.

After scoring the best October opening ever with $80 million, “Venom” has found a foothold with general audiences this weekend as it holds its drop-off to 55 percent, well within the range for many Marvel Studios films in their second weekend. Though the drop is likely to be steeper next weekend with the arrival of Universal’s “Halloween,” it won’t faze Sony at all. The $100 million blockbuster has already made its money with a 10-day total of $142 million and a global total of well over $300 million.

Also Read: How Far Can 'Venom' Go at the Box Office?

Sony’s “Goosebumps 2,” meanwhile, is in a tight race for the No. 3 spot on this weekend’s charts with Universal’s Neil Armstrong biopic “First Man,” with “Goosebumps” currently estimated for a $16 million opening from 3,521 screens. While the Jack Black sequel is looking at a start lower than its 2015 predecessor ($23.6 million), it also has a much lower $35 million budget. A domestic total run of $60 million is now within reach for this film as it tries to serve as a family alternative to “Halloween” and “Venom.”

Though Sony hasn’t had as many explosive hits as Disney, WB, or Universal, the last two years at the box office have been a dramatic turnaround for the studio’s fortunes.

After Sony Pictures Entertainment reported a loss of $719 million in 2016, hits like “Spider-Man: Homecoming” pushed 2017’s total back out of the red with a $376 million profit. That was followed by the $962 million global total of “Jumanji: Welcome to the Jungle,” as well as other hits like “Peter Rabbit” and “Hotel Transylvania 3,” leading to Sony extending the contract of their Motion Picture Group head Tom Rothman last month.

Elsewhere on the charts, “First Man” is going to face a tough battle if it wants to leg out at the box office after earning an estimated $16.5 million start from 3,620 screens. The film earned a B+ on CinemaScore to go with its 88 percent Rotten Tomatoes score. IMAX, which provided cameras for the film’s lunar scenes, accounted for 22 percent of the movie’s revenue with $3.7 million from 405 screens.

While all those results are solid and consistent with Universal’s projections, the studio wants the film to perform like the Oscar Best Picture winner “Argo,” which opened to $19.6 million in mid-October 2012 and showed incredible endurance with a $136 million domestic run. “Argo” earned an A+ on CinemaScore, though, so if “First Man” isn’t leaving as big an impression with early audiences, it might be difficult to build the word of mouth necessary to find long-term success in this competitive October market, even though reactions have been mostly positive.

But even if “First Man” ends up being one of those quality films that gets squeezed out by a crowded movie slate, Universal is still looking at a good month as it releases “Halloween” next week, with projections for that film sitting at a very strong $60 million launch.

Sitting in between “Venom” and this weekend’s newcomers is Warner Bros.’ “A Star Is Born,” which is proving to be the awards contender of choice for audiences right now with a $28 million second weekend. That’s just 35 percent down from its $42.9 million opening last weekend, giving it a 10-day total of $94.1 million and a global total of $135.3 million against a $36 million opening.

Finally, Fox’s “Bad Times at the El Royale” has flopped with a seventh place finish, opening behind third-weekend releases “Smallfoot” and “Night School” with a $7.8 million opening from 2,808 screens. The film had been projected for an $8-12 million start against a $30 million budget. Reviews were solid with 71 percent on Rotten Tomatoes, but only earned a B- on CinemaScore.