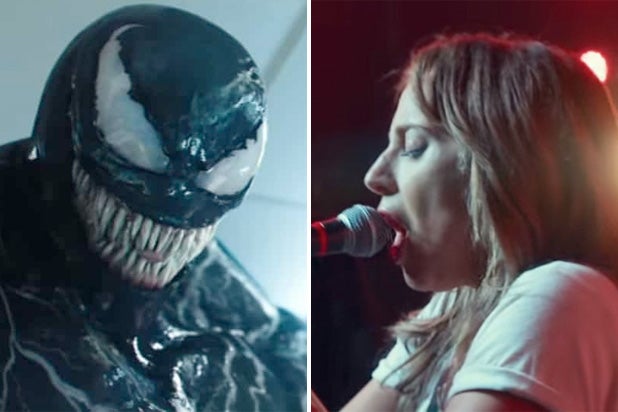 Sony’s “Venom” and Warner Bros.’ “A Star Is Born” are poised to stay atop the box office charts for a second weekend, with “Venom” holding on to the top box office spot with a $34-35 million weekend.

That result for the Tom Hardy film would be a 57 percent drop from its opening weekend, consistent with the drop for most Marvel Studios films.  It’s also worth noting that the drop is somewhat inflated considering “Venom” scored the biggest October opening of all time with $80 million.

A total of $30 million or higher is what Sony is looking for, as it shows that the word of mouth from hardcore Venom fans is creating interest among general audiences.

Also Read: How Far Can 'Venom' Go at the Box Office?

“A Star Is Born” is definitely finding a steady audience, with estimates showing a $28 million second weekend, just a 34 percent drop from its $42.9 million debut. Much like last weekend, “A Star Is Born” is drawing in women and other moviegoers who aren’t interested in the campy, naughty charms of “Venom.”

But while the pair of films are continuing to push the October box office to new heights, they are creating heavy competition for this week’s new releases. “First Man,” the Neil Armstrong biopic from Universal, is in third this weekend with a current estimate of $16-17 million after making $5.8 million from 3,640 locations on Friday.

That’s on the lower end of projections set by both Universal and independent trackers, who had expected a $16-20 million start.

A bigger concern is that while “First Man” has done well with critics with a 88 percent Rotten Tomatoes score, audiences weren’t quite as enthusiastic with a B+ on CinemaScore.

By comparison, other space films released in October like “Gravity” and “The Martian” — two films that take a more sci-fi approach to space than “First Man” — earned an A- and A, respectively, from audience polls.

Another comp is “Argo,” a film whose box office performance Universal was hoping to match here with a $19 million opening and a $136 million domestic run. But that too had a stronger CinemaScore with an A+. As the concept of seasonality at the box office comes to an end and quieter months become more competitive, “First Man” may be one of the films that gets solid reception but is squeezed out by tough competition.

In fourth is Sony’s “Goosebumps 2: Haunted Halloween,” which is currently heading for a $15 million opening but could push that figure higher after Saturday estimates and possibly take the No. 3 spot from “First Man.” Friday results for the film were $4.8 million from 3,521 screens, with a B+ on CinemaScore and a 57 percent RT score.

Falling outside the top five is Fox’s “Bad Times at the El Royale,” a $30 million film from “Cabin in the Woods” director Drew Goddard. The film received solid reviews with a 71 percent RT score, but hasn’t won over audiences with a B- on CinemaScore and just under $3 million grossed on Friday from 2,808 screens.

The film is estimated to make a $7.8 million opening, lower than tracker expectations and below third weekend releases “Smallfoot” and “Night School” on the charts.